Each generation has a different way of looking at the world and workplace issues. In this chapter, the instructors will select two employees to play the roles of Jane, a Human Resources Manager, and Smith, a new employee in the organization. Depending on the types of conversation they might have among themselves, try to fill the following tables. 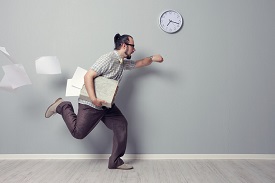 Smith has recently joined the organization as a young and bright HR executive, with a lot of promise. His qualification and talent is beyond question and everyone at office likes him a lot. However, it was recently observed that he was coming late to the office and was leaving early.

It’s not a judgment on his work, which was always proper and timely, but it bothered many of the older employees at work, nonetheless. It gave the impression of a lack of commitment toward the organization and disregard for working hours.

As the Human Resources manager of the organization, Jane observed this pattern but initially overlooked it, as all employees need some adjustment period, but she summoned Smith to have a word with him after she found that the rest of the employees were being negatively influenced by Smith’s behavior.

Let’s understand the different ways by which Jane can make Smith more compliant to the working hours in the organization, without making the entire conversation confrontational and emotionally hostile. Jane draws up a table and asks him to fill up those circles that he feels best describes his attitude toward work and his perception toward management and authority, in general.

The following table has scores for each column. Smith needs to circle the description that sums up his attitude toward work in each row. Then, add up the score for all columns.

Using the following table, you can keep a record of the people in your workplace as per the generation they come from and the scores they carry individually in different important fields −