In this chapter, let us discuss the architecture of the Flutter framework.

The core concept of the Flutter framework is In Flutter, Everything is a widget. Widgets are basically user interface components used to create the user interface of the application.

For example, the widget hierarchy of the hello world application (created in previous chapter) is as specified in the following diagram − 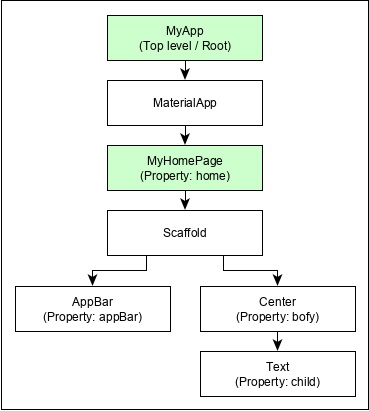 Here the following points are worth notable −

The most important concept of Flutter framework is that the framework is grouped into multiple category in terms of complexity and clearly arranged in layers of decreasing complexity. A layer is build using its immediate next level layer. The top most layer is widget specific to Android and iOS. The next layer has all flutter native widgets. The next layer is Rendering layer, which is low level renderer component and renders everything in the flutter app. Layers goes down to core platform specific code

The following points summarize the architecture of Flutter −

We will discuss all these concepts in detail in the upcoming chapters.