Explain the operation of DFA with block diagram in TOC 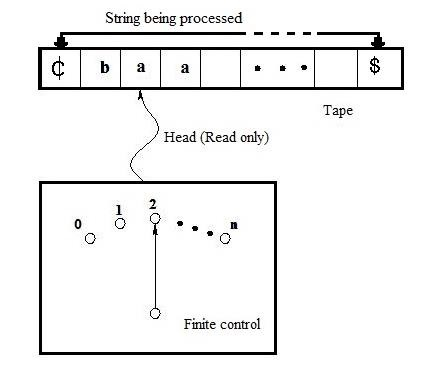 The different components of finite automata are as follows −

A finite automaton or a deterministic at initial time, it is assumed to be that the machine in the initial state q0, with its input mechanism on the leftmost symbol of the input string in input tape.

During every move of the automaton, the input mechanism moves one position to the right, so each move consumes one input symbol.

When the string is reached end, the string is accepted, if the automaton is in one of its final states. Otherwise, it is rejected.

The input mechanism can move only from left to right and reads exactly one symbol on each step.

The transitions from one internal state to another are governed by the transition function δ.

This machine M accepts the string 01. Let’s start from the state q0, the symbol 0 is scanned form the input tape first.

Looking at the edges of the graph, it is clear that the automaton remains in state q0. Next, the read-only head is upgraded by 1 and it reads 1 and the automaton goes into state q1.

We are now at the end of the string and, at the same time, in a final state q1.