The original name of Ember.js was SproutCore MVC framework. It was developed by Yehuda Katz and initially released on in December 2011. The stable release of Ember.js is 2.10.0 and this was released on November 28, 2016.

Consider the following points to understand the use of Ember.js −

Following are the some of the most prominent features of Ember.js −

It is easy to configure Ember.js in your system. By using the Ember CLI (Command Line Interface) utility, you can create and manage your Ember projects. The Ember CLI deals with different kinds of application asset management such as concatenation, minification and versioning and also provide generators to produce components, routes etc.

To install Ember CLI, you need to have the following dependencies −

Ember CLI integrates Ember patterns into development process and focuses easily on the developer productivity. It is used for creating Ember apps with Ember.js and Ember data.

To install the beta version, use the following command −

To check the successful installation of Ember, use the following command −

After executing the above command, it will show something like this −

Ember.js has the following core concepts − 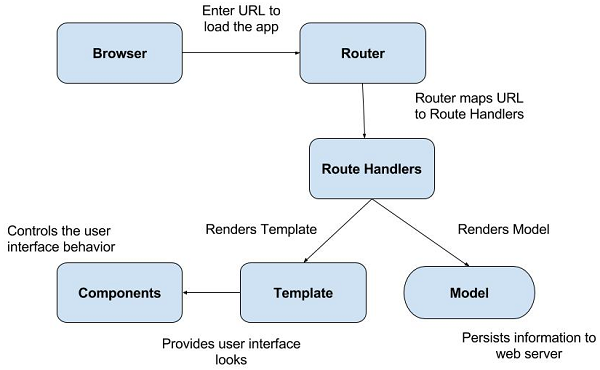 The URL loads the app by entering the URL in the address bar and user will click a link within the app. The Ember uses the router to map the URL to a route handler. The router matches the existing URL to the route which is then used for loading data, displaying the templates and setting up an application state.

Templates are powerful UI for the end-users. Ember template provides user interface look of an application which uses the syntax of Handlebars templates. It builds the front-end application, which is like the regular HTML. It also supports the regular expression and dynamically updates the expression.

You can easily configure the Ember.js in your system. The installation of Ember.js is explained in the EmberJS Installation chapter.

Let us create one simple app using Ember.js. First create one folder where you create your applications. For instance, if you have created the "emberjs-app" folder, then navigate to this folder as −

Inside the "emberjs=app" folder, create a new project by using the new command −

When you create a project, new command provides the following directory structure with files and directories −

To run the application, navigate to the newly created project directory −

Now open the browser and navigate to http://localhost:4200/. You will get the Ember Welcome page as shown in the image below − 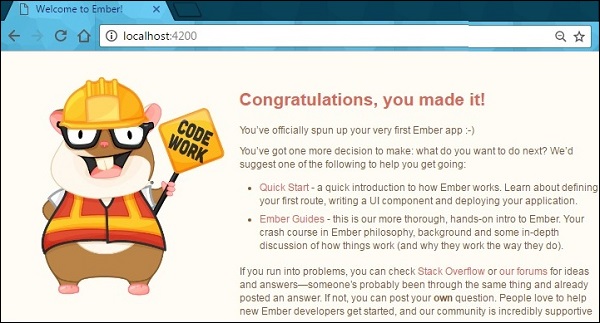 In Ember.js, all objects are derived from the Ember.Object. Object-oriented analysis and design technique is called object modeling. The Ember.Object supports features such as mixins and constructor methods by using the class system. Ember uses the Ember.Enumerable interface to extend the JavaScript Array prototype to give the observation changes for arrays and also uses the formatting and localization methods to extend the String prototype.

The following table lists down the different types of object model in Ember.js along with their description −

Router is a core feature of EmberJs which translates an URL into a series of templates and represents the state of an application.The Ember uses the router to map the URL to a route handler. The router matches the current URL to other routes which are used for loading data, displaying the templates and to set up an application state.

Route handler performs some actions such as −

The following table lists down the different routers in Ember.js along with their description −

A template is used to create a standard layout across multiple pages. When you change a template, the pages that are based on that template automatically get changed. Templates provide standardization controls.

The below table shows some more details about templates −

The Ember.js components uses the W3C web component specification and provides true encapsulation UI widgets. It contains the three main specification as templates, shadow DOM and custom elements. The component is declared within the data-template-name which has a path name instead of a plain string and are prefixed with "components/".

The following table lists down the action events of actions −

Model is a class that extends the functionality of the Ember Data. When a user refreshes the page, the contents of page should be represented by a model. In Ember.js, every route has an associated model. The model helps to improve the performance of application. The Ember Data manipulates the stored data in the server and also works easily with streaming APIs like socket.io and Firebase or WebSockets.

The store is a central repository and cache of all records available in an application. The route and controllers can access the stored data of your application. The DS.Store is created automatically to share the data among the entire object.

Model is a class that extends the functionality of the Ember Data, which specifies relationships with other objects. When a user refreshes the page, the contents of page should be represented by a model.

A record is an instance of a model that includes the information, which is loaded from a server and you can identify the record by its model type and ID.

An adapter is an object that is responsible for translating requested records from Ember into appropriate calls to particular server backend. For instance, if you want to find a person with ID of 1, then Ember will load the URL by using HTTP as /person/1.

The records can be cached automatically by the store and returns the same object instance when you load the records from the server for the second time. This improves the performance of your application and displays the application UI to the user as fast as possible.

The following table lists down the details about models −

Ember uses NPM and Bower for managing dependencies which are defined in package.json for NPM and bower.json for Bower. For instance, you may require installing SASS for your style sheets which is not installed by Ember while developing Ember app. To accomplish this, use the Ember Addons for sharing the reusable libraries. If you want to install any CSS framework or JavaScript datepicker dependencies, then use the Bower package manager.

The ember install command will save all the dependencies to the respective configuration file.

It is a package manager for the web which manages the components of HTML, CSS, JavaScript or image files. It basically maintains and monitors all packages and examines new updates. It uses the configuration file bower.json to keep track of applications placed at the root of the Ember CLI project.

You can install the project dependencies by using the following command −

You can place the third-party JavaScript in the vendor/ folder of your project which are not available as an Addon or Bower package and place the own assets such as robots.txt, favicon, etc. in the public/ folder of your project. The dependencies which are not installed by Ember while developing the Ember app, should be included by using the manifest file ember-cli-build.js.

You can give the asset path as the first argument and the list of modules and exports as the second argument. You can include these assets in the ember-cli-build.js manifest file as −

The different assets can be used in different environments by defining object as first parameter which is an environment name and the value of an object should be used as asset in that environment. In the ember-cli-build.js manifest file, you can include as −

Once all the assets are placed in the public/ folder, they will get copied into the dist/ directory. For instance, if you copy a favicon placed at the public/images/favicon.ico folder, this will get copied into the dist/images/favicon.ico directory. The third-party assets can be added manually in the vendor/ folder or by using the Bower package manager via the import() option. The assets which are not added by using the import() option, will not be present in the final build.

For instance, consider the following line of code which imports the assets into the dist/ folder.

The above line of code creates a font file in dist/font-awesome/fonts/fontawesomewebfont.ttf. You can also place the above file at a different path as shown below −

It will copy the font file in dist/assets/fontawesome-webfont.ttf.

The Ember application can be extended by using the Ember.Application class which declares and configures the objects that are helpful in building your application.

The following table lists down more details about models −

The Ember.js can be configured for managing the application's environment. The configuring Ember.js includes the following topics −