Electronic Circuits - Diode as a Switch

Hence an electrical switch is more useful than a Mechanical switch.

Working of Diode as a Switch

The following circuit explains the diode acting as a switch. 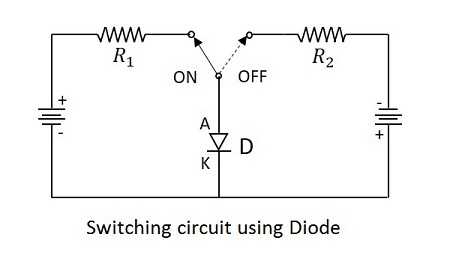 As the forward current flows till then, with a sudden reverse voltage, the reverse current flows for an instance rather than getting switched OFF immediately. The higher the leakage current, the greater the loss. The flow of reverse current when diode is reverse biased suddenly, may sometimes create few oscillations, called as RINGING.

This ringing condition is a loss and hence should be minimized. To do this, the switching times of the diode should be understood.

The sudden change from forward to reverse and from reverse to forward bias, affects the circuit. The time taken to respond to such sudden changes is the important criterion to define the effectiveness of an electrical switch.

To understand this more clearly, let us try to analyze what happens once the voltage is applied to a switching PN diode.

For example, if N-type is considered, the excess of holes that enter into N-type after applying forward bias, adds to the already present minority carriers of N-type material.

During Forward biased Condition − The minority carriers are more near junction and less far away from the junction. The graph below explains this. 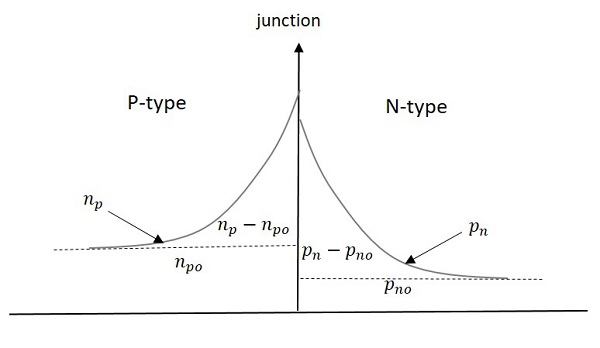 During reverse bias condition − Majority carriers doesn’t conduct the current through the junction and hence don’t participate in current condition. The switching diode behaves as a short circuited for an instance in reverse direction.

The minority carriers will cross the junction and conduct the current, which is called as Reverse Saturation Current. The following graph represents the condition during reverse bias.

In the above figure, the dotted line represents equilibrium values and solid lines represent actual values. As the current due to minority charge carriers is large enough to conduct, the circuit will be ON until this excess charge is removed.

The time required for the diode to change from forward bias to reverse bias is called Reverse recovery time ($t_{rr}$). The following graphs explain the diode switching times in detail. 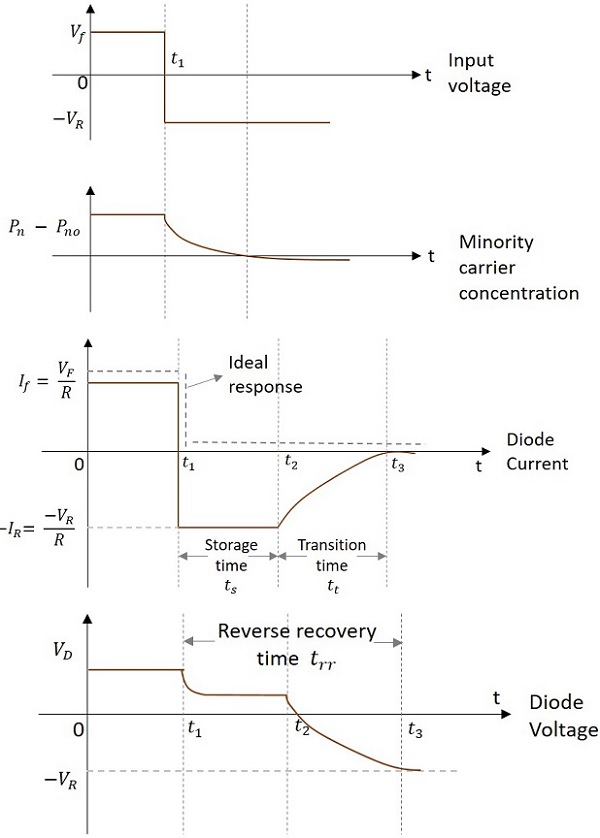 From the above figure, let us consider the diode current graph.

So, the time taken to get completely to open circuit condition is

Let us just go through the definitions of the time periods discussed.

There are few factors that affect the diode switching times, such as

There are many applications in which diode switching circuits are used, such as −