The process of transferring an unintended electrical energy directly to the earth through a low resistance wire is called electrical earthing. It refers to the connection of a noncurrent-carrying part of the equipment or neutral of supply system to the ground, which represents the zero potential. The leakage current chooses the simple low resistance path to flow. Thus, the electrical system and equipment are protected from damage.

The electrical equipment has two non-current carrying parts such as neutral of the system and frame of the equipment. Earthing system is also classified into two types.

The process of connecting neutral of the system to the earth through a GI wire is known as Neutral earthing or System earthing. It is used in star winding systems including generator, transformer, etc.

When the metallic frame of the equipment is connected to the earth by the help of a conducting wire then it is called Equipment earthing. In fault condition in the apparatus, the fault current flows to the earth and the system is protected.

Earthing is needed for the following reasons −

Earthing of a system is done in the installation to connect the respective parts with electrical conductors or electrodes. The electrode is placed near the soil or below the ground level, which has flat iron riser under the ground. The noncurrent-carrying parts are connected with the flat iron. 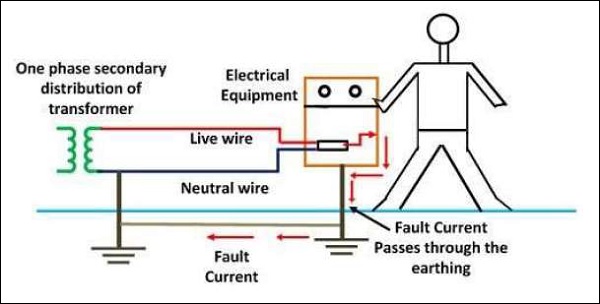 The ground resistance of an electrode is measured by the fall of potential method. The total set up is shows in the figure given below, where -

The following figure shows the setup to measure ground resistance − 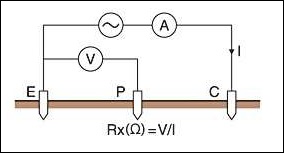 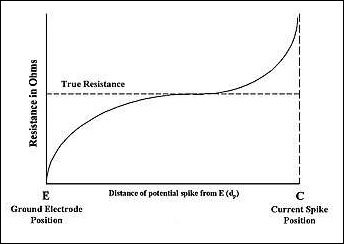 From the figure, the portion of the curve is marked as R of E, which is a nearly horizontal slope in the curve. The upward slope indicates the effect of the resistance of C. For the field measurement earth tester calibration, the ratio is directly used.

The earthing system must follow the rules and regulations for the risk reduction according to the following standards.