We will now understand what Earth Fault Protection is. We will being by focusing on Earth Fault.

Earth Fault is an inadvertent fault between the live conductor and the earth. When earth fault occurs, the electrical system gets short-circuited and the short-circuited current flows through the system. The fault current returns through the earth or any electrical equipment, which damages the equipment. It also interrupts the continuity of the supply and may shock the user. To protect the equipment and for the safety of people, fault protection devices are used in the installation.

The devices give the tripping command to break the circuit when earth fault occurs. The fault current is restricted and the fault is dispersed by the Restricted Earth Fault Protection (REFP) scheme. Normally earth fault relay, earth leakage circuit breaker and ground fault circuit interrupter, etc. are used to restrict the fault current.

It is a safety device used in electrical installations with high earth impedance. It detects small stray voltages on the metal enclosures of electrical equipment. The result is to interrupt the circuit if a dangerous voltage is detected. The EFR is protected against tripping from transients and prevents shock. 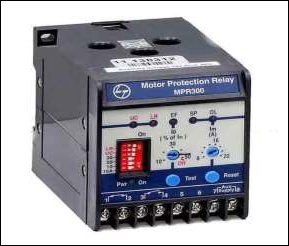 The Earth Leakage Circuit Breaker detects the leakage current directly and prevents injury to humans and animals due to electrical shock. It is a voltage-sensing device and has recently been replaced by Residual Current Circuit Breaker (RCCB), which is a current sensing device. It is a special type of latching relay that is connected to the main power supply. When the fault current flows from live wire to the earth wire within the installation, the coil of ELCB senses the voltage and switches off the power. This requires a manual reset process to work again. The RCCB senses the leakage current and sends a signal to trip the system.

The Ground Fault Circuit Interrupter is a safety device to prevent an electrical accident when any faulty tool is plugged in. It is a fast acting circuit breaker to shut down the supply when the earth fault occurs within 1/40th of a second. It compares the incoming and outgoing current from the equipment along the circuit conductor. If there is any difference as little as 5 mA, GFCI restricts the current and trip quickly. GFCI does not help much with line contact hazards but protects from fire, overheating and destruction of wire insulation.

Let us consider a star winding transformer, which is protected by a Restricted Earth Fault Protection with EFR protecting device as shown in the figure below.

The following image shows the Earth Fault Protection with EFR − 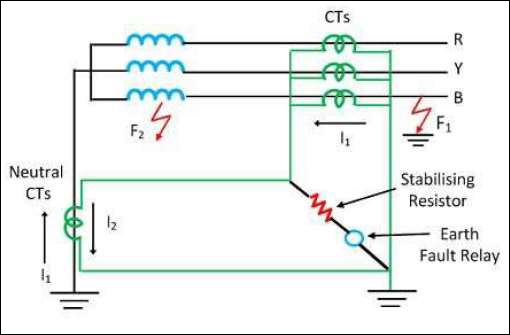 When an external fault F1 occurs in the network, I1 and I2 flow through the secondary side of the CTs. The resultant of I1 and I2 will be zero. However, if an internal fault F2 occurs inside the protective zone, only I2 flows and I1 is neglected. The resultant current I2 passes through the earth fault relay, which senses the fault current and protects the restricted portion of winding. The fault current is approximately 15% more than the rated winding current. To avoid the magnetizing inrush current, the stabilizing current must be in series with the relay.