A cable is a group of wires swathed in sheathing that ensures a smooth electricity supply. It needs to be installed carefully following the National Electricity Code and National Building Code for various electrical applications.

There are more than 20 different types of cables according to the design and application. Let us consider a few important types here −

These cables have a flexible plastic jacket with two to four wires that are commonly used for indoor residential cabling and special varieties are for underground and outdoor cabling.

The wires in such cables are grouped together and embedded in the flexible material. These are useful for outdoor lighting and in-ground application.

There are three stranded copper wires insulated with cross-linked Polyethylene and PVC sheathing. These cables are used for outdoor application and high-stress installation.

The following images show the different types of cables −

More than one conductor that is insulated individually. The outer insulation gives extra security. The different varieties of MC cables are used in homes and music industries. For example, the audio multicore ‘snake cable’.

A tubular insulating layer with a tubular conducting shield protects the inner conductor of the cable. As the two inner sheaths share the same geometrical axis, the name coaxial is justified. It is used for carrying television signals and connecting video equipment.

UTP cable consists of two wires twisted together with solid copper cores and not insulated individually. These are often used in telephones, security cameras and data networks.

It has various conducting wires running parallel to each other on a flat plane. Ribbon cables are applicable for low voltage applications such as in computers and its peripherals.

It either is a specially designed coaxial cable or bundled fiber optic cables, which have many layers of banded metal sheathing, heavy rubber coverings, and shock absorbing gel waterproof wrapped thread-fortified tape. This is considered a popular choice for transmission and communication requirements.

The TL cable consists of two wires that are generally used in the transmission of a signal from the antenna to receivers like TV and radio.

There are two individually insulated conductors, which are used in DC or low frequency AC applications.

The inner insulated wires in TPC are twisted or intertwined; otherwise, it is same as paired cable. 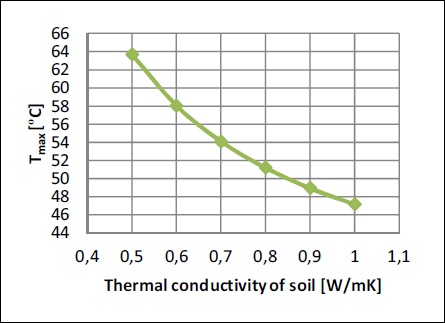 The thermal conductivity varies according to the material used in cable layer as the cable needs to dissipate heat to its surroundings.

The thermal conductivity of soil changes the intensity of heat transfer from the power cable. As the conductivity increases, the soil receives heat faster and the cable temperature lowers down. The soil conductivity depends upon the water content (caused by rainfalls or droughts) and moisture. The distribution of temperature should be done effectively while working in the underground electrical network system.

1. Which material is used to cross-link the core in Metallic Sheathed Cable?

2. Which cable is suitable for cameras and data networks?

3. What happens to the cable core temperature with increase in soil thermal conductivity?