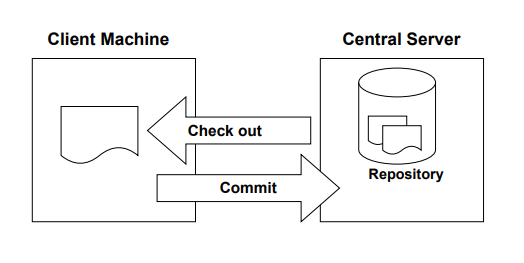 When a user wants to work with a file, they connect to the server via a client machine and download a local copy of the file. The user works on the copy that is available on the user’s local system and finally sends changes made to the file or codebase to the central server. It is necessary that the central server is always reachable to be able to perform source code management. Some common centralized version control systems that are used include Concurrent Version Systems (CVS), Subversion (SVN), and Perforce.

Unlike a Centralised Version Control System that is hierarchical, distributed version control systems follow a more egalitarian approach. Just like in a Centralized Version Control System, you checkout a copy of the repository, make changes, and check it back in. The main difference between the two types is that Centralized version control systems keep the history of changes on a central server. Everyone requests the latest version of the work and pushes the latest changes to the central server.

In case of a Distributed Version Control System, each collaborator will have the complete repository on the local machine including the complete revision history, commit information. The collaborator can push his version of the code or new changesets locally. This helps avoid failure due to a crash of the central versioning server. Once a feature or a group of changesets are ready, the collaborator can then push all of them to the central server at once. In other words, unlike centralized version control systems, it is not necessary to be online to change revisions or add changes to the work. Moreover, a collaborator can choose to share his code with selected people for feedback before finalizing and making his code available to the entire team.

The following diagram shows the operations that can be performed in a distributed version control system. 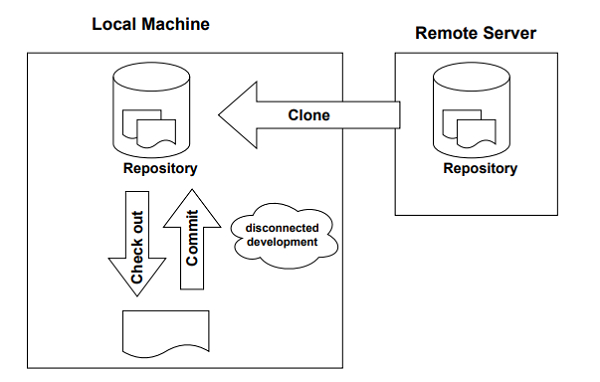 In Git’s terminology the central server is called a repository. The copy of the files downloaded by a collaborator from the repository is called a clone. A local repository is one that is copied from the server. A developer works on the clone. When all features are made and tested properly the developer can then sync the final codebase with the remote repository.