The Chittorgarh fort has seven gates out of which one was built in fifth century and rest were built in 15th century. Ram Pol is the main gate to enter the fort. The gates were made in such a way that they provide full security to the fort from invasion. They were built with heavy stones and pointed arches. The arches were pointed so that the elephants of the enemy cannot push the gates. They also protected the gate from cannons. Along with these, there are parapets for the archers to shoot arrows.

Padan Pol is the gate where Prince Bagh Singh was killed in 1535 while Jaimal was killed between Bhairon Pol and Hanuman Pol. In the commemoration of the death of Jaimal, chhatris and statues were made. A cenotaph has also been built in which a statue of Jaimal sitting on a horse has been built. A chhatri for Patta has also been made at Ram Pol in his commemoration. Jodala Pol is the combination of two gates. The arches of the gate is connected to the base of the Laxman Pol.

Padan Pol is the first gate of the fort and its name is derived from the Rajasthani word Patwi which means eldest or first. There is a legend which says that after Alauddin Khilji made a siege, a buffalo kid named pada was brought down with force so it was named padan pol. 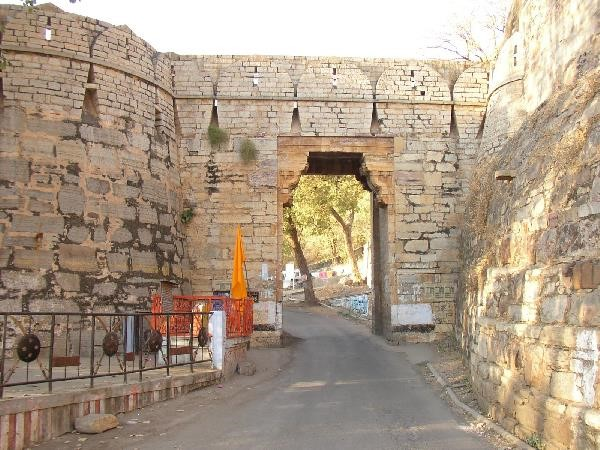 A statue of Bagha Rawat or Bagh Singh is situated on the left side of the gate. Bagh Singh was the grandson of Rana Mokal and was killed during a war with Bahadur Shah, king of Gujarat Sultanate.

Bhairon Pol is the second gate of the fort and the statue of Lord Bhairon is situated nearby. It was renamed as Fateh Pol as Maharana Fateh Singh rebuilt it. It has also been said that Bhairon Das was a soldier who was killed while fighting with the forces of Bahadur Shah hence the gate was named as Bhairon Pol. Jaimal and Patta were killed between Bhairon Pol and Hanuman Pol. 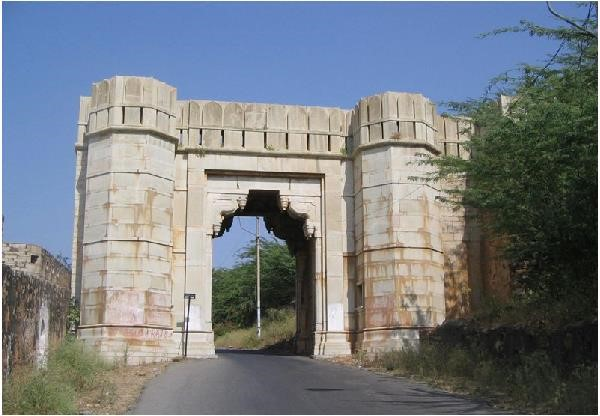 Hanuman Pol is the third gate of the fort and is named so due to the construction of Hanuman temple nearby. Ganesh Pol is the fourth gate where a temple of Lord Ganesh is situated. The temple is very old and beautiful.

Jodala Pol is the fifth gate of the fort and since it is connected with the sixth pol so it was named as jodala pol. Between this and the Ganesh pol there is a monument of eklingnath. Laxman Pol is the sixth gate to which a tourist can reach after a sharp turn from jodala Pol. Near to Laxman Pol there is a temple for Lord Laxman. Ram Pol is the seventh gate and it is named so as the ancestors of the kings of Mewar were the descendants of Lord Rama.