Code Division Multiple Access (CDMA) is a sort of multiplexing that facilitates various signals to occupy a single transmission channel. It optimizes the use of available bandwidth. The technology is commonly used in ultra-high-frequency (UHF) cellular telephone systems, bands ranging between the 800-MHz and 1.9-GHz.

Code Division Multiple Access system is very different from time and frequency multiplexing. In this system, a user has access to the whole bandwidth for the entire duration. The basic principle is that different CDMA codes are used to distinguish among the different users.

Techniques generally used are direct sequence spread spectrum modulation (DS-CDMA), frequency hopping or mixed CDMA detection (JDCDMA). Here, a signal is generated which extends over a wide bandwidth. A code called spreading code is used to perform this action. Using a group of codes, which are orthogonal to each other, it is possible to select a signal with a given code in the presence of many other signals with different orthogonal codes.

How Does CDMA Work?

CDMA allows up to 61 concurrent users in a 1.2288 MHz channel by processing each voice packet with two PN codes. There are 64 Walsh codes available to differentiate between calls and theoretical limits. Operational limits and quality issues will reduce the maximum number of calls somewhat lower than this value.

The following figure shows the technicality of the CDMA system. During the propagation, we mixed the signals of all users, but by that you use the same code as the code that was used at the time of sending the receiving side. You can take out only the signal of each user. 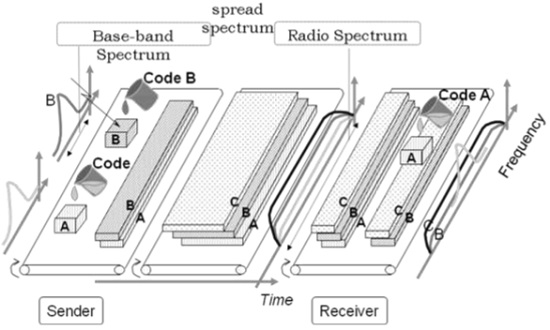 The factors deciding the CDMA capacity are −

Capacity in CDMA is soft, CDMA has all users on each frequency and users are separated by code. This means, CDMA operates in the presence of noise and interference.

In addition, neighboring cells use the same frequencies, which means no re-use. So, CDMA capacity calculations should be very simple. No code channel in a cell, multiplied by no cell. But it is not that simple. Although not available code channels are 64, it may not be possible to use a single time, since the CDMA frequency is the same.

CDMA is a spread spectrum technique. Each data bit is spread by a code sequence. This means, energy per bit is also increased. This means that we get a gain of this.

This is a gain factor and the actual data propagation rate. On an average, a typical transmission condition requires a signal to the noise ratio of 7 dB for the adequate quality of voice.

Translated into a ratio, signal must be five times stronger than noise.

The Voice Activity Factor of 0.4 is considered = -4dB.

Hence, CDMA has 100% frequency reuse. Use of same frequency in surrounding cells causes some additional interference.

The disadvantages of using CDMA are as follows −