In CDMA, since all the mobiles transmit at the same frequency, the internal interference of the network plays a critical role in determining network capacity. Further, each mobile transmitter power must be controlled to limit the interference.

When all mobile stations transmit the signals at the same power (MS), the received levels at the base station are different from each other, which depend on the distances between BS and MSs. 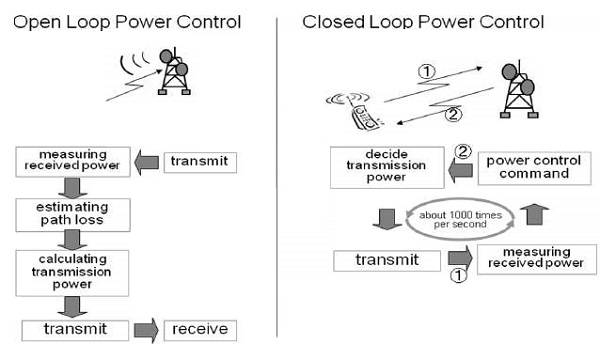 In addition to the near-far effect described above, the immediate problem is to determine the transmit power of the mobile when it first establishes a connection. Until the mobile does not come in contact with the base station, it has no idea of the amount of interference in the system. If it attempts to transmit high power to ensure contact, then it can introduce too much interference. On the other hand, if the mobile transmits less power (not to disturb other mobile connections), the power cannot meet the Eb/N0 as required.

As specified in the IS-95 standards, mobile acts when it wants to get into the system, it sends a signal called access.

In CDMA, each user's transmission power is allocated by the control power to achieve the same power (Pr) which is received by the base station/BTS with access probe with low power. The mobile sends its first access probe, then waits for a response from the base station. If it receives no response, then the second access probe is sent with a higher power.

This power control is used to compensate for the slow variables shading effects. However, since the rear and forward links are on different frequencies, the estimate transmit power does not give accurate solution for the power control because of the path loss to the front of the base station. This power control fails or too slow for fast Rayleigh fading channels.