The weightage of each position can be represented as follows −

In digital systems, instructions are given through electric signals; variation is done by varying the voltage of the signal. Having 10 different voltages to implement decimal number system in digital equipment is difficult. So, many number systems that are easier to implement digitally have been developed. Let’s look at them in detail.

The easiest way to vary instructions through electric signals is two-state system – on and off. On is represented as 1 and off as 0, though 0 is not actually no signal but signal at a lower voltage. The number system having just these two digits – 0 and 1 – is called binary number system.

Each binary digit is also called a bit. Binary number system is also positional value system, where each digit has a value expressed in powers of 2, as displayed here.

And decimal equivalent of this number is sum of product of each digit with its positional value.

Computer memory is measured in terms of how many bits it can store. Here is a chart for memory capacity conversion.

Decimal equivalent of any octal number is sum of product of each digit with its positional value.

Decimal equivalent of any hexadecimal number is sum of product of each digit with its positional value.

Now a computer understands only numeric values, whatever the number system used. So all characters must have a numeric equivalent called the alphanumeric code. The most widely used alphanumeric code is American Standard Code for Information Interchange (ASCII). ASCII is a 7-bit code that has 128 (27) possible codes. 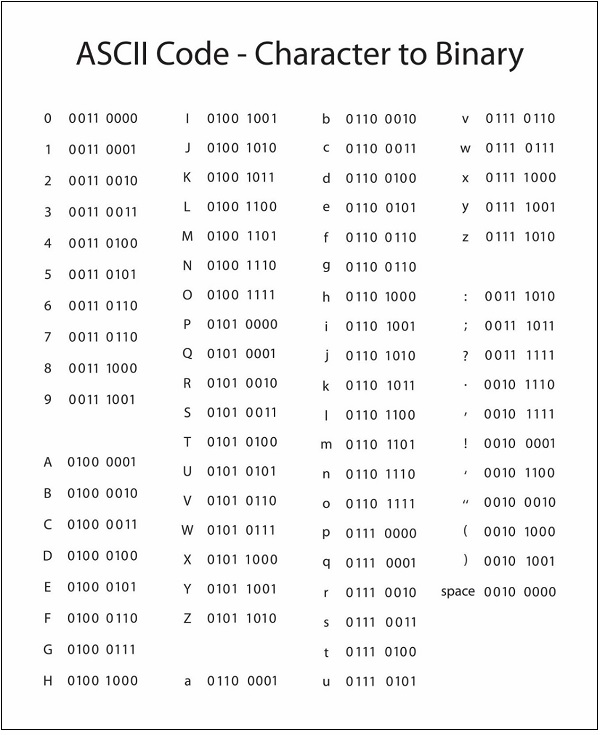 ISCII stands for Indian Script Code for Information Interchange. IISCII was developed to support Indian languages on computer. Language supported by IISCI include Devanagari, Tamil, Bangla, Gujarati, Gurmukhi, Tamil, Telugu, etc. IISCI is mostly used by government departments and before it could catch on, a new universal encoding standard called Unicode was introduced.

Unicode is an international coding system designed to be used with different language scripts. Each character or symbol is assigned a unique numeric value, largely within the framework of ASCII. Earlier, each script had its own encoding system, which could conflict with each other.