Documentation for software testing helps in estimating the testing effort required, test coverage, requirement tracking/tracing, etc. This section describes some of the commonly used documented artifacts related to software testing such as −

A test plan outlines the strategy that will be used to test an application, the resources that will be used, the test environment in which testing will be performed, and the limitations of the testing and the schedule of testing activities. Typically the Quality Assurance Team Lead will be responsible for writing a Test Plan.

A test plan includes the following −

It is a one line statement that notifies what area in the application will be tested. Test scenarios are used to ensure that all process flows are tested from end to end. A particular area of an application can have as little as one test scenario to a few hundred scenarios depending on the magnitude and complexity of the application.

The terms 'test scenario' and 'test cases' are used interchangeably, however a test scenario has several steps, whereas a test case has a single step. Viewed from this perspective, test scenarios are test cases, but they include several test cases and the sequence that they should be executed. Apart from this, each test is dependent on the output from the previous test. 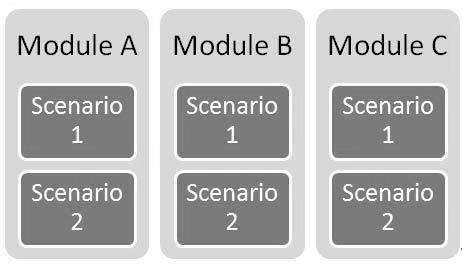 Test cases involve a set of steps, conditions, and inputs that can be used while performing testing tasks. The main intent of this activity is to ensure whether a software passes or fails in terms of its functionality and other aspects. There are many types of test cases such as functional, negative, error, logical test cases, physical test cases, UI test cases, etc.

Furthermore, test cases are written to keep track of the testing coverage of a software. Generally, there are no formal templates that can be used during test case writing. However, the following components are always available and included in every test case −

Many test cases can be derived from a single test scenario. In addition, sometimes multiple test cases are written for a single software which are collectively known as test suites.