The Waterfall Model was the first Process Model to be introduced. It is also referred to as a linear-sequential life cycle model. It is very simple to understand and use. In a waterfall model, each phase must be completed before the next phase can begin and there is no overlapping in the phases.

The Waterfall model is the earliest SDLC approach that was used for software development.

Waterfall approach was first SDLC Model to be used widely in Software Engineering to ensure success of the project. In "The Waterfall" approach, the whole process of software development is divided into separate phases. In this Waterfall model, typically, the outcome of one phase acts as the input for the next phase sequentially.

The following illustration is a representation of the different phases of the Waterfall Model. 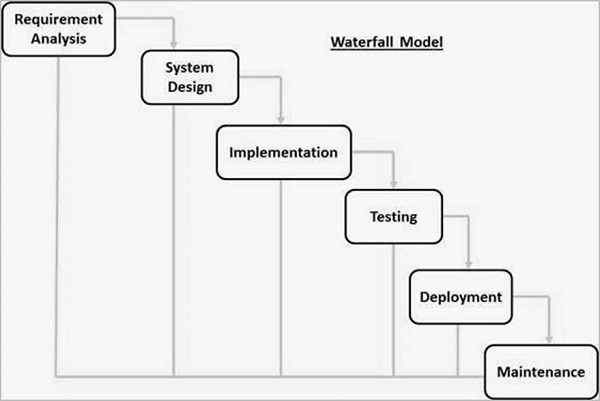 The sequential phases in Waterfall model are −

All these phases are cascaded to each other in which progress is seen as flowing steadily downwards (like a waterfall) through the phases. The next phase is started only after the defined set of goals are achieved for previous phase and it is signed off, so the name "Waterfall Model". In this model, phases do not overlap.

Every software developed is different and requires a suitable SDLC approach to be followed based on the internal and external factors. Some situations where the use of Waterfall model is most appropriate are −

The advantages of waterfall development are that it allows for departmentalization and control. A schedule can be set with deadlines for each stage of development and a product can proceed through the development process model phases one by one.

Development moves from concept, through design, implementation, testing, installation, troubleshooting, and ends up at operation and maintenance. Each phase of development proceeds in strict order.

The disadvantage of waterfall development is that it does not allow much reflection or revision. Once an application is in the testing stage, it is very difficult to go back and change something that was not well-documented or thought upon in the concept stage.

The major disadvantages of the Waterfall Model are as follows −