Debugging is a technical procedure to find and remove bugs or defects in a program and get expected results. Debugging includes testing and monitoring. It is very complex when the subunits of a program are tightly coupled. We can debug a program using the debugger tools that follow the prescribed APIs. A debugger allows you to step through every aspect of a code, inspect all the elements, and remove errors, if any.

There are different kinds of techniques to debug a Java program. The old method of debugging is by using print statements at the end of every segment which will print the trace statements on the console. Take a look at the following code.

Here, we have a program that adds two numbers and prints the output. Notice that at each step, we have introduced a print statement that prints the state of the program on the console. This is the traditional approach to debug a program.

In addition, we have advanced concepts that can be used to debug a program such as:

We can debug a program using various methods:

Here are some examples of Java debuggers that are available in the market:

This tutorial covers how to use the command-line debugger, jdb.

The Java debugger (JDB) is a tool for Java classes to debug a program in command line. It implements the Java Platform Debugger Architecture. It helps in detecting and fixing bugs in a Java program using Java Debug Interface (JDI).

The following architecture defines the role of JDB in JDK. It contains mainly three units: 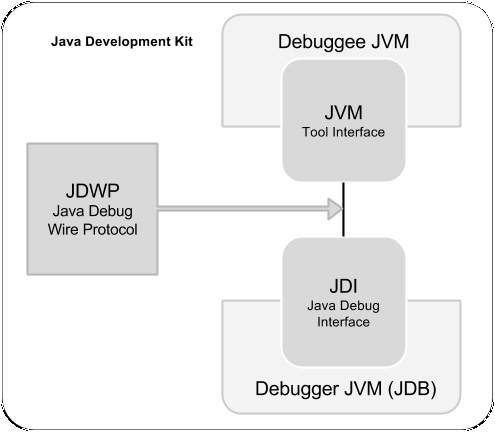 It is a native programming interface implemented by VM. It provides ways to inspect and debug the state of the application running on the VM. It allows an implementer (VM Implementer) that can be enclosed easily into the debugging architecture. It also uses a third-party channel called JDWP for communication.

It is a high-level Java interface implemented as front end. It defines the variable information at user code level. It is recommended to use a JDI layer for all debugger development. It uses JDWP for communication with the debuggee JVM.