Women in China used to dress in a variety of ways. That clothing evolved throughout the dynasty. For instance, the cheongsam was popular in the 1920s among socialites and upper-class women; in the 1960s, extremely austere clothing trends were common; and today, a wide range of clothes are worn. In addition to this, China's various provinces and regions also have different clothing styles. Women wore loose clothing with long, wide sleeves most often during the Qin and Han dynasties. High-heeled clogs with typically some embroidery on them were worn underneath the long skirt. A noblewoman typically had a Jinguo scarf wrapped around her arm, while ordinary or poor ladies had no arm ornamentation. Women's clothing tended to be more exposed throughout the Sui and Tang dynasties. What were commonly worn were smallsleeved coats, typically made of yarn; skirts that were still lengthy; and wide, long scarves. They might expose the area of their bodies above their chests. 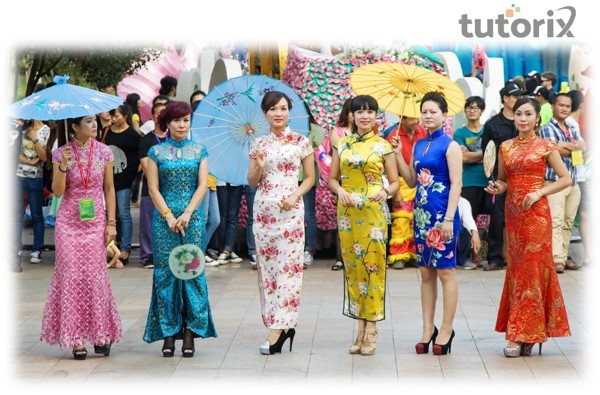 Ruqun was worn over Banxiu, also known as Banbi ("half arm"), a style of vest or outerwear with half-length sleeves. Its collar came in a variety of styles, but the front could be fastened with ties or a metal button. Chinese historical records claim that the short jacket worn by Chinese people served as the inspiration for the banbi clothing design. It was initially intended as a waistcoat for palace servants but quickly gained popularity among the general populace. The main female character, Huo Xiaoyu, wears this look most of the time in the Tang Dynasty novel "Legend of Huo Xiao Yu."

Similar to a cloak, a beizi is a piece of traditional Chinese clothing worn by both men and women. Beizi, also called banbi during the Tang dynasty when it was most popular, is thought to have been imported from Central Asia during that time through the Silk Road, a time of widespread cultural interaction. It is also thought that during the Song dynasty, when the sleeves of the garment were longer, it originated from banbi.

A typical Chinese woman's outfit is called a chang-ao. It is considered to be a lengthier variant of ruqun and is a type of formal attire. It's essentially a skirtcovering that was produced from zhiduo during the Ming Dynasty. Wide sleeves, a shorter length than zhiduo, and the absence of side panels at the side slits characterize it (thus showing the skirt worn underneath). An optional removable protective huling (sometimes known as a "protection collar") is frequently sewed to the collar. The huling may be white or any other color, usually one that is dark. The clothing's color matches that of the collar.

It wasn't until the mid-late Tang dynasty that the differences between royal women's clothes and other styles started to stand out more clearly.

In the Ming Dynasty, empresses and crown princesses (the wives of the crown prince) wore the traditional Chinese clothing known as diyi. It was a formal outfit, solely appropriate for ceremonial occasions. It was embroidered with long-tailed pheasants and round flowers and was a type of shenyi. It was paired with a phoenix-shaped crown (without the dangling strings of pearls by the sides). Since the Zhou dynasty, empresses and other royal noblewomen have worn the diyi, known by a variety of titles, including huiyi in the Zhou and Song dynasties and miaofu in the Han dynasty.

Women with shackled feet in China would put on footwear called lotus shoes. To imitate a lotus bud, the shoes had a cone-or sheath-like shape. They were small enough to fit in the palm of your hand and delicately made from cotton or silk. In other styles, the soles were wedge-shaped or had heels. They were created in a variety of designs and hues, and were frequently ornately embellished with embroidered images of animals or flowers that may have extended to the shoe's sole. When worn underneath a long skirt, certain patterns only cover the toes, giving the appearance of a foot that is tied. Even though foot binding is no longer used, numerous lotus shoes still exist as artifacts in public or private collections.

A traditional headdress for women in China was the Phoenix crown. It was worn by noblewomen during ceremonies or official events during the Ming dynasty. It was also the customary bridal headpiece. It was embellished with gold dragons, phoenixes made of kingfisher feathers, beaded pheasants, pearls, and precious stones. The quantity of pearls used varied from 3426 to 5449 pieces, while the quantity of gemstones used varied from 95 to 128 pieces. These pearls, diamonds, and kingfisher feathers are fashioned into decorative flowers, leaves, clouds, and bobins. The total crown weighed between two and three kilograms.

Chinese traditional dress, known as ruqun, is mostly worn by ladies. It has a blouse on top of a wraparound skirt. It has a lengthy history and has been worn by females since the time of the Warring States. Typically, the skirt was worn with the blouse tucked in. During the Han dynasty, ruqun's appeal decreased, but it recovered during the Southern and Northern dynasties. The skirts were worn with short blouses and fastened higher and higher up the waist during the Sui and Tang dynasties, eventually above the breasts. Parallel/straight-collar blouses were also worn in this era, revealing the breasts' cleavage in addition to the typical crossed-collar blouses.

During the Ming Dynasty, both male and female officials and aristocrats wore yuanlingshan the most of the time. Officials' and nobles' yuanlingshan differed from civilians' in that it featured a mandarin square. The yuanlingshan had small cuffs on its mainly curved sleeves. It featured side slits and a round neck. Yuanlingshan, the bridal clothing used by officials and nobility, was also used by commoners. The wedding party's groom dons a wusha cap and the yuanlingshan of an official of the ninth rank. The bride is decked up in a scarlet yuanlingshan with a noblewoman's xiapei and a phoenix crown.

The body-hugging, one-piece cheongsam is a female variant of the changshan, which was modified in Shanghai. It is referred to as a mandarin gown in English and is called the qpáo (Wade-Giles ch'i-p'ao) in Mandarin Chinese. The cheongsam or qipao (chipao) that is most frequently associated with today was developed in Shanghai during the 1920s and made popular by socialites and upper-class women.

During the late 1970s liberalization of communist dress regulations, China's design trends and how its citizens dressed saw a significant transformation. Brand names appear to be becoming more prevalent in modern urban apparel. Greater emphasis is placed on formal attire over casual attire for adults on the streets of major urban centers, especially Shanghai, where a more western appearance is becoming more popular. Brand-name apparel and western fashion are preferred by teenagers. Typically, cartoon figures are worn on children's clothing. But the hanfu movement is also making an effort to bring back old fashions like the hanfu. The host presented silk-embroidered tangzhuang jackets as the traditional national dress of China at an Asia-Pacific Economic Cooperation conference held in Shanghai in 2001.

China started adopting more western-style clothing in the middle of the 20th century as it opened up to the outside world. Many Chinese women today dress in what we would refer to as "regular" clothing outside of their wedding ceremony but nevertheless wear a more contemporary version of the Qipao for the event.