WAP stands for Wireless Application Protocol. WAP represents a suite of protocols rather than a single protocol. WAP aims at integrating a simple lightweight browser also known as a micro-browser into handheld devices, thus requiring minimal amounts of resources such as memory and CPU at these devices.

WAP tries to compensate for the shortfalls of the wireless handheld devices and the wireless link by incorporating more intelligence into the network nodes such as the routers, web servers, and BSs.

The primary objectives of the WAP protocol suite are the following.

WAP adopts a client-server approach. It specifies a proxy server that acts as an interface between the wireless domain and core wired network. This proxy server, also known as a WAP gateway, is responsible for a wide variety of functions such as protocol translation and optimizing data transfer over the wireless medium.

The WAP Architecture has been designed to closely follow the web. The only difference is the presence of the WAP gateway is translating between HTTP and WAP.

The three sections to be mentioned regarding WAP client are WAE user agent, WTA user agent and WAP stack.

The element in the network where the information (web, WAP) applications reside are WAP proxy, WAP gateway or WAP server −

WAP Gateway is basically software that is placed between a network that supports WAP and IP packet network such as Internet.

WAP protocol stack is shown in the following figure − 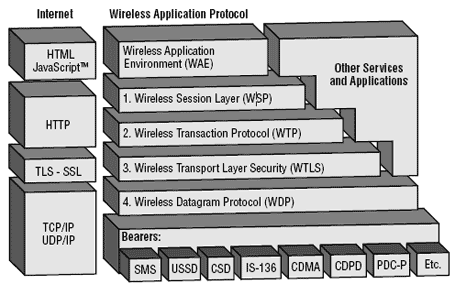 The application layer provides an application environment intended for the development and execution of portable application and services WAE consists of two different user agents located on client side.

The WAE user agent consists of browser and the text message editor along with the WTA user agent.

The session layer supplies methods for the organized exchange of content between Client/Service applications.

The connectionless session service provides only non-confirmed service. To start session, the client invokes a WSP primitives that provide some parameters, such as the server address, client address and client headers. In some respects, WSP is basically a binary form of HTTP.

Optional layer that provides, when authentication, privacy and secure connection is present, between applications. It is based on SSL (Secure Socket Layer). It provides services that ensure privacy, server authentication, client authentication and data integrity.

A Standard SSL session is opened between the web server and the WAP gateway, and WTLS session is initialized between the gateway and the mobile device. The encrypted content is send through this connection from the server to the gateway, which translates it and sends it to mobile phone. The transaction between SSL and WTLS takes place in the memory of the WAP gateway.

This is the bottom layer, connected with the bearer service offered by the operator. Bearer services are the communication between the mobile phone and the base stations. They include SMS, CSD, USSD, GSM, GPRS, DECT, CDMA, FDMA, and TDMA.

The physical layer prepares the data to be sent from the mobile device over the air services and sends the data using bearer service implemented in the network that the device is operating in. WDP has an interface with various bearer networks, so it must have a bearer specific implementation. WDP is the only layer that must be rewritten to support different bearer networks. The WTP layer implements a simple request-response transaction oriented protocol instead of the three-way-handshake connection mechanism.