Antenna and Wave propagation plays a vital role in wireless communication networks. An antenna is an electrical conductor or a system of conductors that radiates/collects (transmits or receives) electromagnetic energy into/from space. An idealized isotropic antenna radiates equally in all directions.

Wireless transmissions propagate in three modes. They are −

Line of sight propagation requires the transmitting and receiving antennas to be within the line of sight of each other. Depending upon the frequency of the underlying signal, the particular mode of propagation is followed.

In this section, we will discuss the various limitations that affect electromagnetic wave transmissions. Let us start with attenuation.

Since signals at different frequencies attenuate to different extents, a signal comprising of components over a range of frequencies gets distorted, i.e., the shape of the received signal changes.

A standard method of resolving this problem (and recovering the original shape) is to amplify higher frequencies and thus equalize attenuation over a band of frequencies.

Dispersion is the phenomenon of spreading of a burst of electromagnetic energy during propagation. Bursts of data sent in rapid succession tend to merge due to dispersion.

The most pervasive form of noise is thermal noise, which is often modeled using an additive Gaussian model. Thermal noise is due to thermal agitation of electrons and is uniformly distributed across the frequency spectrum.

Other forms of noise include −

While an impulse noise may not have a significant impact on analog data, it has a noticeable effect on digital data, causing burst errors. 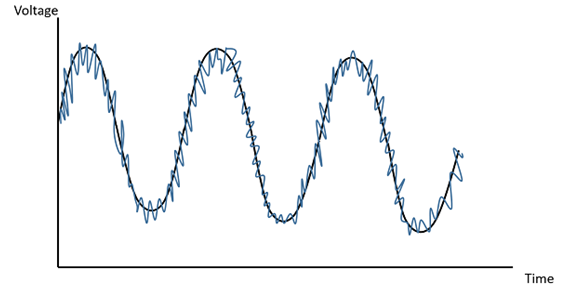 The above figure clearly illustrates how the noise signal overlaps the original signal and tries to change its characteristics.

Fading refers to the variation of the signal strength with respect to time/distance and is widely prevalent in wireless transmissions. The most common causes of fading in the wireless environment are multipath propagation and mobility (of objects as well as the communicating devices).

One consequence of multipath propagation is that multiple copies of a signal propagation along multiple different paths, arrive at any point at different times. So the signal received at a point is not only affected by the inherent noise, distortion, attenuation, and dispersion in the channel but also the interaction of signals propagated along multiple paths.

This is a measure of spectral broadening caused by the rate of change of the mobile radio channel. It is caused by either relative motion between the mobile and base station or by the movement of objects in the channel.