Wireless communication involves the transmission of information over a distance without the help of wires, cables or any other forms of electrical conductors.

The evolution of wireless technology has brought many advancements with its effective features. 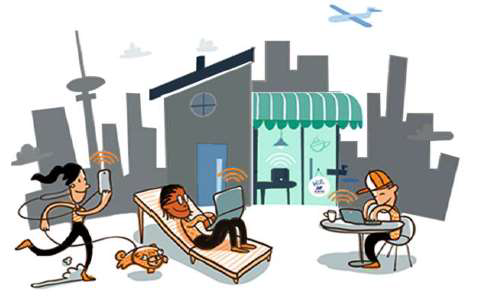 Wireless communication involves transfer of information without any physical connection between two or more points. Because of this absence of any 'physical infrastructure', wireless communication has certain advantages. This would often include collapsing distance or space.

Wireless communication has several advantages; the most important ones are discussed below −

Wired communication entails the use of connection wires. In wireless networks, communication does not require elaborate physical infrastructure or maintenance practices. Hence the cost is reduced.

Example − Any company providing wireless communication services does not incur a lot of costs, and as a result, it is able to charge cheaply with regard to its customer fees.

Wireless communication enables people to communicate regardless of their location. It is not necessary to be in an office or some telephone booth in order to pass and receive messages.

Miners in the outback can rely on satellite phones to call their loved ones, and thus, help improve their general welfare by keeping them in touch with the people who mean the most to them.

Wireless communication devices like mobile phones are quite simple and therefore allow anyone to use them, wherever they may be. There is no need to physically connect anything in order to receive or pass messages.

Example − Wireless communications services can also be seen in Internet technologies such as Wi-Fi. With no network cables hampering movement, we can now connect with almost anyone, anywhere, anytime.

Improvements can also be seen in speed. The network connectivity or the accessibility were much improved in accuracy and speed.

Example − A wireless remote can operate a system faster than a wired one. The wireless control of a machine can easily stop its working if something goes wrong, whereas direct operation can’t act so fast.

The wireless technology helps easy accessibility as the remote areas where ground lines can’t be properly laid, are being easily connected to the network.

Example − In rural regions, online education is now possible. Educators no longer need to travel to far-flung areas to teach their lessons. Thanks to live streaming of their educational modules.

Example − A wireless mobile can ensure you a constant connectivity though you move from place to place or while you travel, whereas a wired land line can’t.