SLR represents "Simple LR Parser". It is very simple and economical to execute. But it fails to make a parsing table for some class of grammars, i.e., why CLR and LALR are used which implements mainly all class or type of grammars. It constructs parsing tables which helps to perform parsing of input strings.

SLR Parsing can be done if context-free Grammar will be given. In LR (0), 0 means there is no Look Ahead symbol. 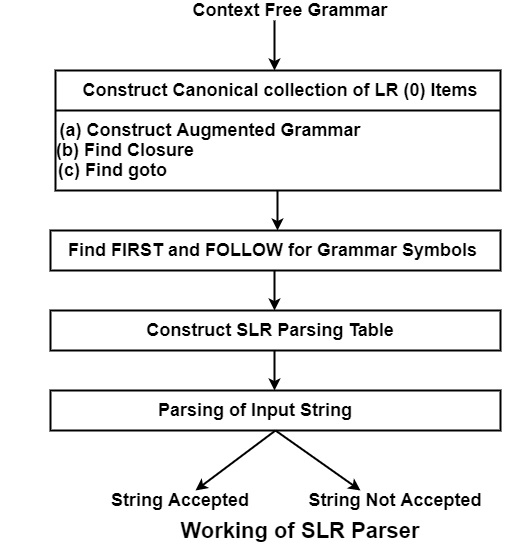 The Canonical collection of LR (0) items

The LR (0) item for Grammar G consists of a production in which symbol dot (.) is inserted at some position in R.H.S of production.

For Example − For the production S → ABC, the generated LR (0) items will be −

To create Canonical LR (0) collection for Grammar, 3 things are required −

Closure − For a Context-Free Grammar G, if I is the set of items or states of grammar G, then −

There are basically two parts of SLR Parsing table

Action and goto table can be filled using the following Algorithm −