What is rain shadow and what causes its formation? 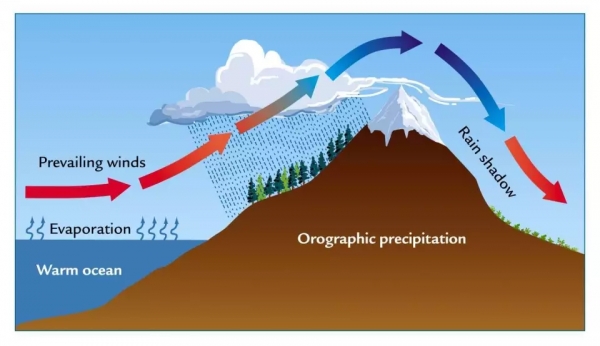 When this wind moves onto a hill or an elevated land, it has lower pressure where its capacity to hold water in the form of water vapor decreases. When it exceeds its maximum capacity to hold water vapor which means, when it reaches its relative humidity by 100%, it results in adiabatic cooling, and then condensation and precipitation, which results in rain, snow or hail storms. This is called Orographic rainfall or Relief rainfall. This side of the hill is called the Windward side.

The other side of the hill will be dry and is called as Leeward side or Rainshadow area. If the wind that brings rain is towards the east, this rain shadow will be on the west. The wind, when passes to the other side of the hill, its slope slowly increases the pressure of the air, lessening the water vapor present in it and the wind gets warmer. This promotes evaporation.

As the prevailing winds over the waterbodies when getting on to the land surface, the wind rises, cools and condenses to rain over the hill. After crossing this portion of the hill, the wind has no water vapor present in it and remains simply dry. This dry wind gets over to the other part of the hill, which gets even warmer. This region which is called as Leeward region or Rain shadow region has little rain over a long period of time and the land will almost be barren. Hence the causes of the rain shadow are the inequalities of land and the condensation of cooler wind.