What are different methods to implement rename buffers? 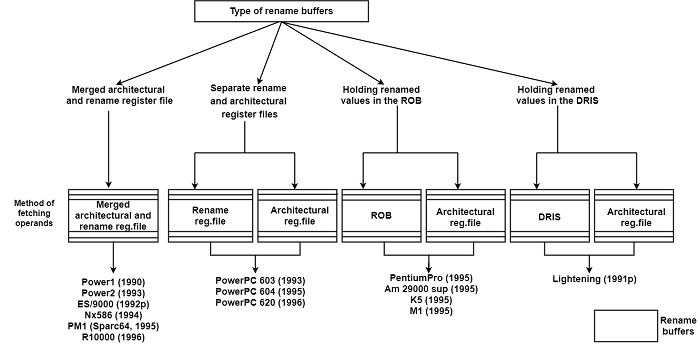 This scheme operates in the following way. Let us assume that at a given moment the architectural registers are associated with a particular set of physical registers. Now for each destination register specified in an instruction, a free physical register is allocated, if available.

In this way, the architectural registers are represented by a dynamically changing set of physical registers. For instance, let us assume that the rename process allocates to the destination register of the instruction

After renaming we get −

In this way, the renaming of the instruction ad r2, r0, r1 results in

An additional scheme is required to reclaim physical registers no longer in use. In the method of a merged register file, reclaiming is a complex task.

In the final method of implementation, the DRIS is used in the same manner as the ROB. The Lightening made use of this alternative. In all three cases, intermediate results are held in the respective rename buffer until their retirement.