As we know out of seven players in a team, six will be fielders while one will be the goalkeeper. Those six fielders also have different positions to occupy. Some important positions are −

One player each is needed for centre-forward and backward position while two players each are needed as wing players and drivers. Players having the overall knowledge of offensive and defensive attacks on these all positions are called as utility players. Let’s discuss about some positions in detail.

The offensive positions include

The point (player positioned just behind 5 meter) always directs the attack and it is the defending team who defends the forward attack. The combination of wing, drivers and point forms a perimeter player team. The 3-3 positional set up is used where there will be two lines in which three players will be there on either line. 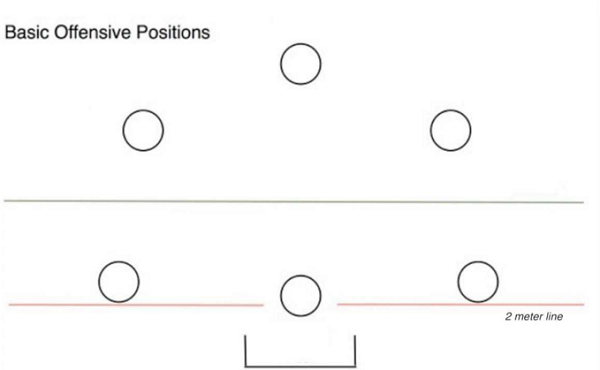 The role of the centre-forward player is to stand nearby the goalie of the opponent team and score the goals. As this position is very important, a strong person is often chosen for this.

The switching version of offensive position is defensive position. In man-to-man position or in zones, the defensive players are placed. Opposing centre-forward is always a double team member who guards for front and back positions. It is very difficult to defend a backhand shot from the centre-forward position because the ball coming through these positions are explosive and all are directed towards the corner of the goals. 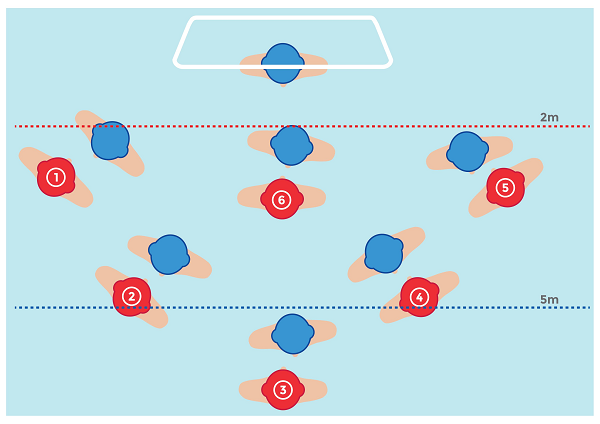 In the figure, the blue ones are showing the defensive positions against the red ones (offensive positions acquired by opponent team). Sometimes the pointer defender slights off his man into the zone to defend the centre position in a better way. This is known as M drop.

The goalkeeper serves the purpose of preventing the opponents to shoot a goal. Apart from blocking goals, another important duty of a goalkeeper is to inform his defenders about the gaps that they may not be able to identify during the match.

The goalkeeper always starts the offensive play hence he/she is called as quarterback. If he can position himself within the 5-meter area, then he can have the following privileges −

During the course of a match, a goalkeeper also informs about the threats of the opponent team’s moves.