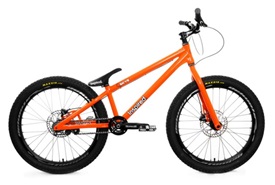 A specially designed bike is used in trial biking for riding on the trails. As better bike control is required, the bikes must have powerful brakes, wider handlebars, lightweight parts, low tire pressure with a thicker rear tire and have no seats.

During the competition, the rider hardly needs to sit down. The lighter the frames are, the less it interferes with the body movements of the player. So the height of the frame stays as low as possible.

In general, the BB spindles are positioned much higher than the line between the axles in case of trial biking frames that are meant for competition.

Presently, in competitions, two classes of trial bikes are used −

Besides mod bikes and stock bikes, 24” bikes are also used which are not allowed in competitions and are only used in street trial biking. 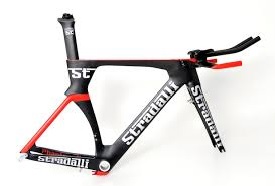 Trial bike frames often have holes in front of the head tube and also in the BB shell, seat tube and the drop outs in order to reduce the weight of the frame. 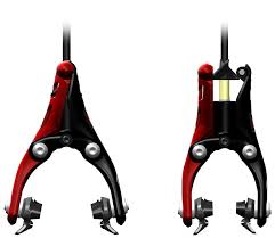 The brakes in the trial bike are made in such a way that it provides more stopping torque especially, on the rear. Instead of locking the wheels, the brake system tries to bring down the bike to a smooth halt from speed. For larger wheeled bikes, hydraulic brakes are applied which act directly on the wheels.

To make the brake lock on the rim as firmly as possible, the braking surface of the rim is roughened using an angle grinder. The rim grinding can vary from slightly roughened to harshly roughened. Depending on the weather condition and the brake pad compounds chosen, different levels of grinds are provided on the rim for better brake performance.

Another effective way of increasing the braking power is applying road tar on the braking surface which makes the brake pads stick to the surface resulting in better braking performance and excellent pad durability.

Rim brakes can also be enhanced by using brake boosters where horse shoe shaped plates are bolted between the brake pistons which increases the force needed to push the brakes apart. 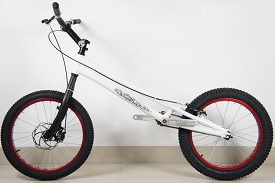 The trial bike rims are wider than mountain bike rims so tires with wider contact patch are used.

In order to increase the resistance of the tires against pinch puncturing, thicker walled tires are used especially on the rear wheel.

The hubs used in trial bikes are very much similar to cross-country bikes and have more cut-outs to save more weight.

All trial bikes that are used for competition have one gear. The gear ratio plays a vital role in deciding the distance the wheels are going to cover through each turn of pedals.

Some of the famous gear ratios are as follows −

The chosen gear ratio provides power and quick acceleration to the bike to move the bike at a low speed.

As an extreme sport, Trial Biking involves high speed and a lot of dangerous stunts. Accidents and injuries are pretty common in trial biking. In order to prevent these injuries, players use different protective gears and equipment. Let us now have a brief description about these equipment.

In order to prevent crashes and accidents, players use body armours and different pads which include hard plastic shells for limb protection and metal enforced plastic plates for spine.

Some players also use chest and abdomen protectors. Players even use elbow pads, shin guards as well as ankle guards for better protection.

Specially made gloves are used by trial biking players for better protection. Extra padding near the hand knuckles are provided with thumb and fingers mostly covered with heavier construction.