The development of a thunderstorm is generally, observed in humid, hot and tropical areas. The humidity present in the air causes the increment of the wind’s temperature in the respective area that contributes to producing "strong upward rising wind".

These winds carry the "droplets of water" upwards where the droplets got freeze. These things contribute to creating a certain kind of weather condition which will be discussed in this tutorial.

What is a thunderstorm?

The "gushes of wind" accompanied by lightning and thunder are commonly known as "thunderstorms". The main reason for the occurrence of a thunderstorm is the "upraising hot wind". The main facts that are required for the formation of a thunderstorm in the tropical areas are included "front like sea breeze", "high level of humidity" and "rapid uprising of warm air".

The moisture or humidity is the general requirement for the formation of clouds that will eventually rain. The sea breeze is the reason for the warm air going upwards. For the occurrence of such a particular weather change, the sun’s light has a crucial role to play that helps to raise the temperature of the wind with which the process gets started. 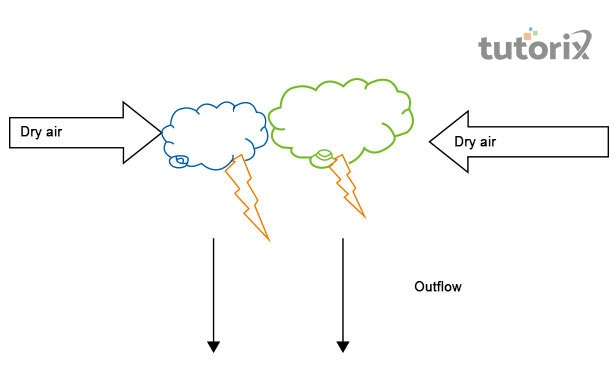 Figure 1: Causes of a thunderstorm

The main reason is the presence of humidity in the air of the respective area and the sun’s rays that make the air warmer than the other portions. Such climate is generally seen in the tropical areas, mostly on the areas of beaches (Nasa, 2022).

The rising temperature of the wind causes the uplift of the wind that carries water droplets which cools down up there and falls down again along with sound and lighting. This type of weather can be dangerous as lightning can kill people and damage forests as well. 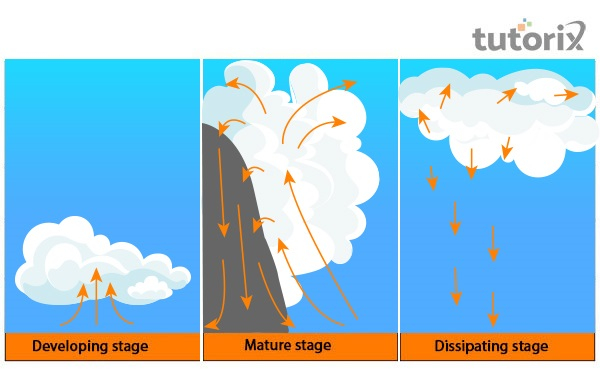 Figure 2: Life cycle of a thunderstorm

The lifecycle of a thunderstorm is mainly comprised of three interconnected stages. 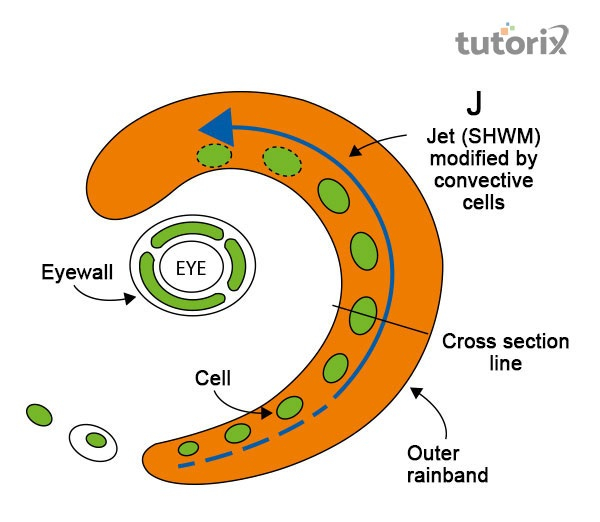 Cyclone, in a simple diction, can be defined by the ocean storms. Such kinds of storms are generally observed to be raised on a large water body, more specifically in the oceans.

At the time of occurrence, it has been identified that the water body spins around an area where the pressure is low. This central part of the cyclone is technically termed with "eye" (Researchgate, 2022). The outer portion of such a storm appears as the main reason behind the rising of immense wind along with heavy rainfall.

All have known it that while vaporising, the water absorbs the heat from the surroundings. This absorbed heat is being released into the atmosphere by the water vapours when they started cooling down.

This situation is considered as the case of the warming up of the surrounded atmosphere. This warm wind tends to rise which causes a drop in the pressure (Kim et al. 2020). At this time, the wind starts to flow to the central low-pressure area from the "surrounding high-pressure area". The repetition of this particular cycle evolves the condition of the occurrence f a cyclone.

The main factors that act as the affecting factors for the cyclones are included the "wind speed", "wind direction", "humidity", and "temperature". The central part of the cyclone where the eye of the cyclone is visible is considered a calm area where no cloud is found (Chen et al. 2020).

In this particular area that is cloudless, the winds are found to be not very strong that causing no rainfall in this specific location. However, the winds around the eye blow at a very high speed. This speed can be increased at a rate of nearly 200 kilometres per hour.

Q1. How is a thunderstorm different from a cyclone?

Ans: In terms of the occurrence of these two weather conditions, these two shares some similarities. The basic difference that can be spotted is that a cyclone always generates "spinning wind" whereas, the generation of such wind is hardly observed in a "thunderstorm".

Q2. What are the effects of cyclones?

Ans: The cyclonic effect can be the cause of severe devastation as the wind of a cyclone has the power of "picking up" an entire vehicle, "heavy containers" and trees. These contribute to the creation of serious damage to the "habitants and landforms".

Q3. What can be done in time of occurrence of a thunderstorm or cyclone?

Ans: The coastal is considered a high alert area for the raising of cyclones and has placed monitors for noticing the weather pattern. In case of observing any chances of being hit by a cyclone, the populated places are generally warned for evacuation.

Q4. What are the four types of thunderstorms?