The Interpretation of Dreams: Sigmund Freud

Even though dreams are often linked to unconscious memories that may be traced back to early infancy or our experiences that have been stored implicitly in memory without access to actual awareness, dreams can also be considered an expression of one emotional self-state. Freud placed a high significance on dreams as the primary gateway to the unconscious, which he saw as a repository for memories and fancies that had been exiled and then repressed from consciousness, as well as a source of natural energy clamoring to be released.

Analysing dreams and memories is attempting to comprehend how past experiences, even those from our early years, continue to influence our actions and emotions now. Freud used to pay attention to the dreamer's associations with the event. The associations and links helped to explain the dreams' motivations: predicament with conflicting past and present times. This helped to provide abundant knowledge regarding the interplay, structure, and development of the human personality.

Freud's psychoanalytic theory, outlined in The Interpretation of Dreams (1900), proposed that "dreams are covered-up symbols of suppressed desires and, as a result, provide us with direct access to the unconscious. Freud claimed that through a mechanism he called dream-work, which includes four operations, the obvious content of dreams, such as everyday occurrences and recollections, serve to conceal their underlying substance or unconscious desires. 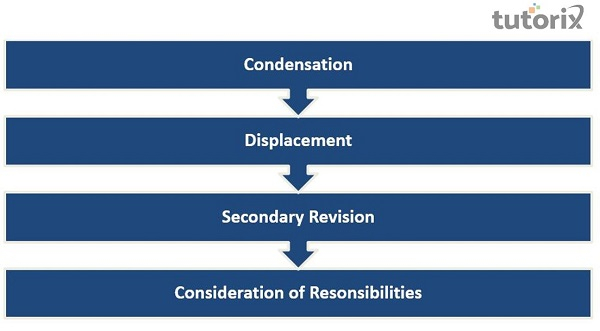 In one of the recent reviews on the interpretation of the dream, the researcher stated the dream in mind is a systematic process of the brain in sleep and explained that the "sleeping brain is a self-organizing system that can weave together various aspects of dreams (i.e., discontinuous and discordant neural signals) into a largely continuous story as you sleep. According to this idea, dreams are a by-product of the sleeping brain rather than an autonomous activity, reflecting the dreamer's physiological and psychological processes such as memory encoding, emotion control, and the reception of environmental inputs,

Contrarily, Freud believed dreams are the way to the unconscious mind, making dream interpretation a crucial psychoanalytic technique. Although their self-organization theory contends that "dreams are a by-product of a dreamer's physical and psychological state while asleep, differentiates between manifest and latent dreams, and emphasizes that the Freudian dream-work is the result of information processing and self-organization of the brain in non- rem phase."

Freud's study of dreams interpretation may have been shown to have some benefits. It does, however, have some limits too. The difficulty of studying dreams and dream analysis is one of the difficulties psychologist faces. On the other side, due to brain activation, many psychologists also believe dreams are purely biological and not only a reflection of the unconscious.