What is the visible spectrum of light? 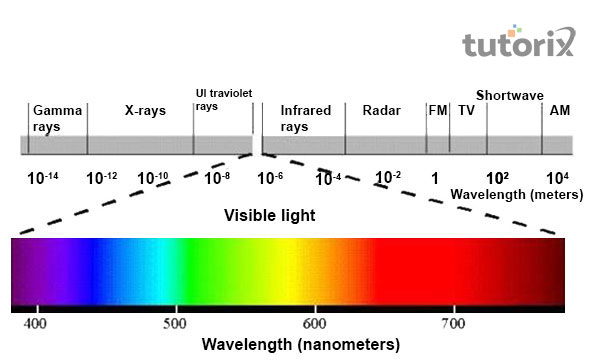 This particular spectrum of visible light does not contain all the colours as all colours are not been distinguishable for the human eye. For an instance, the presence of magenta is missing in the spectrum as it is beyond the detection power of the human eye.

The terms of physics such as frequency and energy shares a close relationship with the wavelength of the electromagnetic spectrum. This phenomenon is considered the responsible attribute for the determination of the colour of the radiation. On the scale of the electromagnetic spectrum, the boundaries present between two colours are not visibly and clearly separated rather the colours are drastically blended with each other (Fan et al. 2019).

This is the reason that the colour band of the visible light spectrum, the ultraviolet region is identified at one edge whereas infrared radiations are identified to be placed at another edge of the band. In the visible light spectrum, each wavelength is represented by a particular colour. Each of these colours consists of different characteristics and wavelengths are distinct.

According to the laws of physics, the more temperature the object will detect, the shorter will the wavelength be. This is the basic reason that a human eye can observe the change of colour of the white light after passing through a prism. For example, the flame of a blow torch can be seen to be shifted from reddish to bluish one in accordance with the colour based on the adjustment of temperature (Researchgate, 2022). This is the reason that helps the scientist mark the temperature of the stars as the stars with the hotter atmosphere will determine different wavelengths of light in comparison to the cooler ones.

The electromagnetic spectrum of visible light 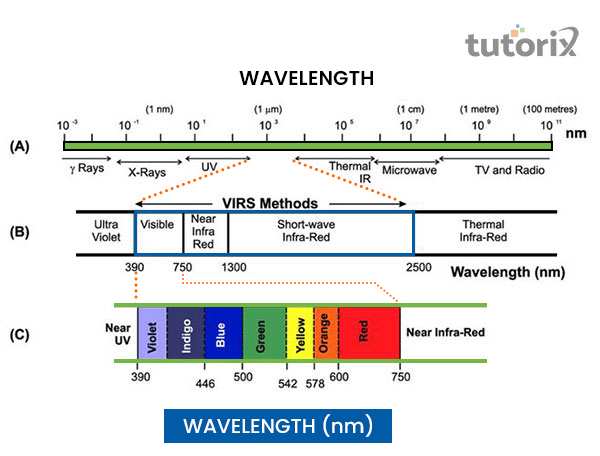 The current tutorial has shed light on defining the concept of the visual spectrum which usually refers to the specific wavelength of the electromagnetic spectrum that is possibly detected by the human eye. The tutorial has further included the discussion based on the wavelength and the colour spectrum chart of white light which can be only seen when the light passes through a prism. It has been seen that every single spectrum of light is of a different wavelength. Based on this wavelength the spectrum defines their place in the seven-coloured chart developed by the refraction and dispersion of light.

Q1. How much of the electromagnetic spectrum is made up of visible light?

The light that possibly travels to our eyes constitutes less than 1% of the visible spectrum. In accordance with the scientist, the measurement represents 0.0035% of the total magnetic spectrum as the human eye is considered to be limited in its range.

Q2. What is defined by the phrase: electromagnetic spectrum?

White light generally consists of seven different lights of different wavelengths. Following this concert, the electromagnetic spectrum is defined as the entire distribution of electronic radiations in accordance with wavelength or the frequency

Q3. What is visible light?

In accordance with the discoveries of physics, $\mathrm{400\:THz\:to\:800\:THz\:}$ is considered the frequency level of visible light. Light with different frequency that is not more than $\mathrm{400\:nm\:to\:700\:nm\:}$ can be distinguished by the optical of the human eye. This is the main reason that makes the light visible optically.

Q4. Which wavelength of electromagnetic energy is visible to the human eye?