Standing waves are created when two waves that are travelling in the opposite directions, interfere with each other and are of identical frequency and amplitude.

This whole thing happens when those waves are superimposed and because of it either the energy of those two waves is added together or gets cancelled at all. A vibration rope that is tied at one end will produce the standing wave or normal mode.

What is a Standing Wave?

A standing wave is called the stationary wave. The standing wave simply defines the wave formed on a string that is formed with the superimposition of two waves of the same frequency and amplitude and travels in the opposite direction from each other (Wang et al. 2021).

A mass on a spring has a natural frequency that helps it to swing back and forth freely. However, a stretched string, which is fixed from one end will swing with a whole spectrum of frequency and has its own pattern of vibration. This kind of pattern in vibration is known as the standing wave or normal mode.

If an extended string is fixed from both ends and a continuous wave is tended towards the x-direction, the wave reaches the specific fixed end it reflects and comes back to the left ends (Ong, W & Zainulabidin, 2020). 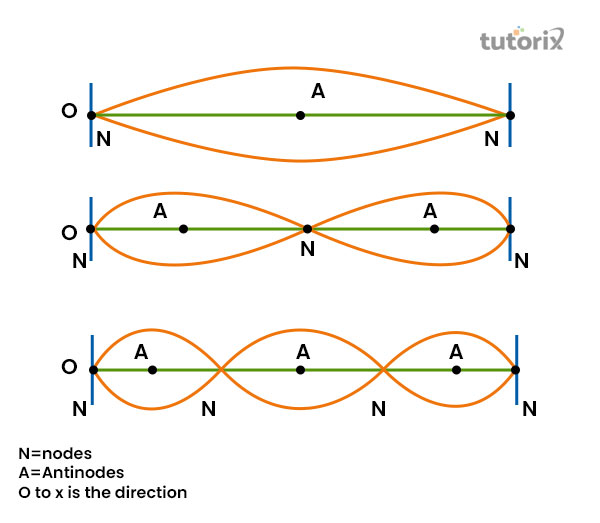 Equation of a standing wave

If it is considered as at any point that is u and time, and two waves are moving towards left and right, means the opposite direction on a string, and they have the same amplitude, frequency and wavelength (Ong, W & Zainulabidin, 2020). Using the trigonometric identities of sin (a + b) = sin (a) cos (b) + cos(a)sin(b) it can be written and the result can form a equation, that is - y(u,t) = A sin(ku - ωt) + A sin(ku + ωt) = 2A sin(ku)cos(ωt).

As the position and time dependency have been separated, the wave is no longer a travelling wave (Wang et al. 2021). No energy travels alongside the string and it will show that one section of the string will swing with maximum amplitude while the other section does not even move. Here, it creates the standing wave or normal mode. 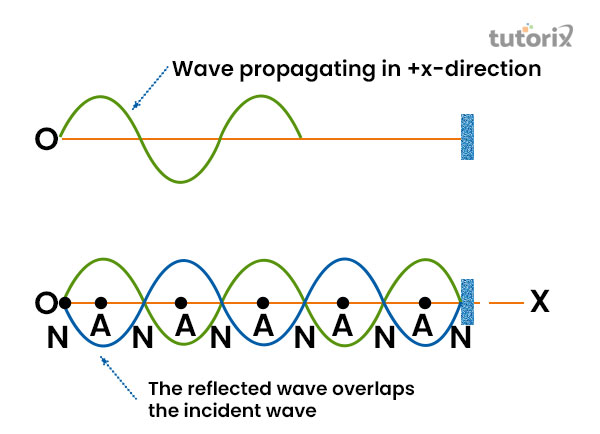 What are nodes and antinodes?

The pattern of the Standing wave is characterised by the alternative pattern of nodes and antinodes.

Node is a particular point in a standing wave where the wave has the minimum amplitude. It can be defined as all standing waves that are characterized by their position along with the medium that stands still (Ong, W & Zainulabidin, 2020).

When a crest meets the trough, it results in a node. At nodes, the amplitude is 0.

Standing waves are also characterized by the Antinodes. The opposite of a node is an Antinode. Antinode creates when the crest meets a crest and a trough meets a trough (labman, 2022).

Antinode can be defined as the region of maximum amplitude that is situated exactly in between the adjacent nodes in a vibrating body or spring, which means a point that goes through the maximum number of displacements in the time of each vibration cycle of a standing wave. 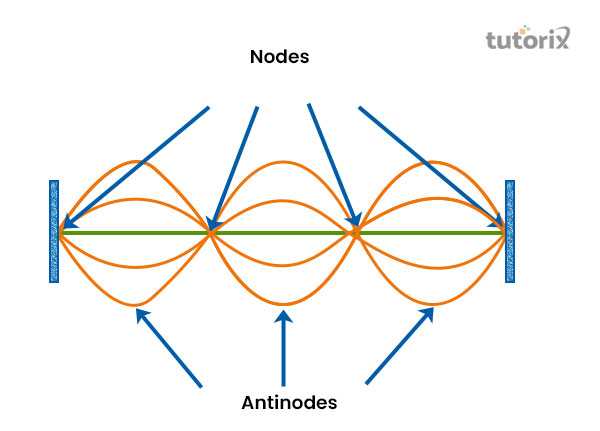 Figure 3: The nodes and antinodes

The best and simplest example of a standing wave is found in the waves produced by any stringed musical instrument, like a plucked guitar string. This plucked guitar string discharges a particular sound frequency that depends on two things, they are the length of the string and how taut or dense the string is (Ong, W & Zainulabidin, 2020).

As only certain standing waves or normal modes can form on the string, as result, each string only makes a certain note. The effects of the standing wave can be seen in a drum too. If powder can be spread on the drum and then make it vibrate, one can check the appearance of a standing wave.

For a better understanding of Standing Wave or normal mode, it is easier to take the example of two people shaking each end of a jump rope (Ualberta, 2022). It will form a standing wave if they started shaking the rope in proper sync.

In short, generally, when two waves reflected or move from both ends produced an interference patterns that is the most complicated and confusing one. However, an integral number of half of the wavelengths fits into the string’s length because the wavelength of the wave is just appropriate; it forms the Standing wave. The pattern of standing waves can be set up in almost any kind of structuration. However, when it is in 2D or 3D, it becomes away more complicated. If one structure vibrates with all the fundamental frequencies then as a result it is shown that all the particles will swing in phase with the exact same frequency.

Standing wave can be found for sure in any kind of musical instrument that has strings. For example, in guitar, the easiest example of a standing wave is two people shaking each end of a jump rope.

Q2. What is called a normal mode?

Standing wave is also referred to as normal mode and formed through longitudinal waves and transverse waves.

Q3. How node and antinode does connected to standing waves?

The Standing wave pattern is characterized by the alternative pattern of one nodes and antinodes. The amplitude of a standing wave can increase without limit until the structure face damage.