Space wave propagation generally takes place when particular radio waves propagate through space from the transmitting antenna around the earth to reach a receive antenna.

Space Wave propagation and its components 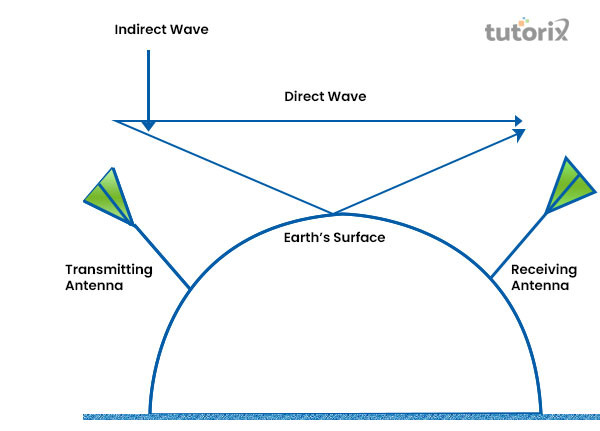 In microwaves, these waves are generally used in a magnificent range of technological implementations, including GPS navigation, the service of the cellular phone, satellite communication, and radio communication. As opined by Wong et al. (2020), microwaves also possess a very high wavelength that further increases the ability to penetrate the materials. These particular features make them essential for communication because they have the ability to pass through different objects.

Electromagnetic Wave and its uses

Electromagnetic waves generally possess a shorter wavelength than that of microwaves. They do not have the ability to enter into the objects. These waves are limited within the straight line of communication. These waves generally bring more information than microwaves (Raza & Salam, 2020). In the field of meteorology and astronomy, these waves are very useful for collecting dates about remote events or objects which are obscured by sunlight and clouds.

The curvature of earth affects space waves. The spreading of the waves occurred along a straight line that is defined by the distance between receiving antenna and transmitting antenna. This is also named as range of communication.

Space wave propagation occurs while the radio waves spread through the space from the transmitting antenna to the receiving antenna. As opined by Carcione et al. (2019), Space wave propagation is a very important thing in the field of physics. These waves have multiple uses in modern technologies. Various kinds of space waves are generally used in different mechanisms such as microwaves, television broadcasts, satellite communication, and many more.

The antenna that is used in this frequency is smaller and it must be placed at a height of various wavelengths above the ground. These waves generally have the nature of line-of-sight, the curvature of earth blockers these waves. As opined by Bennewitz et al. (2018), this is because of the fact that if someone wants to receive the signals across the horizon, then they have to make sure that the receiving antenna has enough height to break off line-on-sight waves.

Therefore, the propagation of the space waves is confined to the lines that are straight in their position. It is identified as the particular distance between the receiving and transmitting antenna and it further enables them to see each other. As opined by Salam (2019), space wave propagation indicates the radio waves that arrive within twenty kilometres of troposphere and it includes both reflected and direct waves. These waves generally travel in a straight line it covers the possible shortest distance. It further indicates that when the waves propagate at a certain point and can be seen through naked eyes.

Space wave propagation denotes the expansion of the radio waves, in the tropospheric layer of earth. These waves are both reflected and direct by the nature. Direct weaves refers to the waves that go directly from source antenna to receiving antenna without any obstruction or interruption. Reflected waves generally reach their destination after being reflected on the building or ground and eventually reach to receiving antenna. These are very important in modern technology and its different uses.

Q1. What is meant by space wave propagation?

Space wave propagation indicates the radio waves that appear in 20km of atmosphere that is in tropopause. It consists of two direct kinds of waves namely direct waves and reflected waves. These particular waves are also called tropospheric propagation. It is because they are able to travel from earth's surface to the surface of troposphere.

Q2. How the wave propagation happens in free space and in earth?

Q3. What is the importance of propagation model?

Q4. What is the importance of s waves?

S waves are very necessary in various technological aspects. Satellite and modern machines are largely affected by these waves. These waves are also very essential in the mode of communication.