In this chapter, we will discuss in detail about the different Analysis Functions in BEx. We will also learn how to perform local calculations, adding conditions to improve data analysis and Exception Reporting.

Using local calculations, you can perform calculations on the numbers based in the current report view. For example, to perform a sum of the top 10 products in the list.

You can use this function to recalculate the result rows in the BEx Web Application as per certain criteria. You override the standard calculation using local calculations. It includes only those numbers in the calculation appear in the current application view.

This function can be used in the following areas −

This function is used to recalculate single values in web applications as per certain selection criteria.

This function can be used in the following areas −

You can also add conditions to improve the data analysis and then the data is fetched only as per that condition. When a condition is applied, it just removes the unrequired rows from the returned data.

Note − This condition doesn’t alter the values displayed or the key figures in the result rows.

You can also define multiple conditions in a query, which can be separated using a logical AND.

The following type of conditions exist −

Defining Exceptions in a Query Designer

When you select a query in the Query Designer to add an exception, you need to navigate to View → Exceptions.

In the Exception section area, select New Exception from the context menu as shown in the following screenshot.

Select the Exception and Right Click → Edit. This will open the Change Exception window.

The next step is to define the Exception in the change exception window. There are different alert levels that you can select. 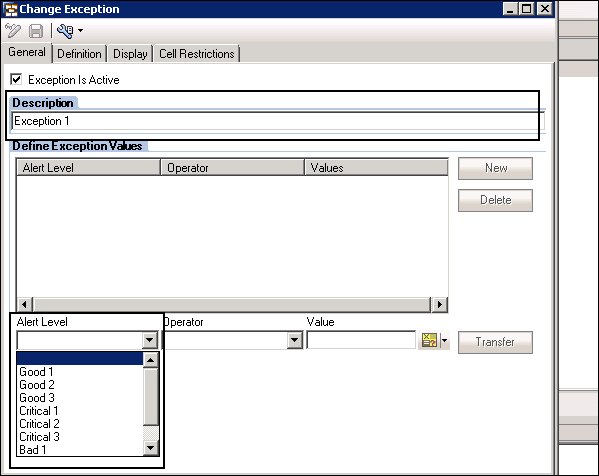 You can select from the following Operator types −

You can define if an exception affects the data cells or the characteristic cells. As per the defined setting, highlighting for the exception is displayed on the numbers for the selected key figure or the text for the most detailed characteristic value.