Punk fashion is a trend that has been influenced by the punk counter-culture ideology. This counter-culture refers to the action taken in response to the people by the administration. Whatever they do, whatever they ought to do, is against the views of the establishment and against groups. This funk subculture is an ideology that develops the ideology of self-establishment. This punk fashion includes not only fabrics but also cosmetics, hairstyles, etc. 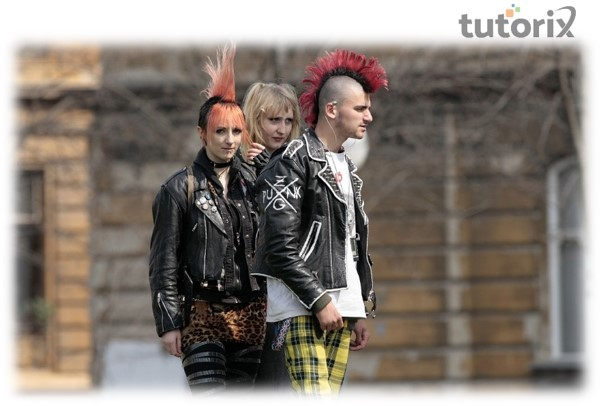 What is Punk Fashion?

Literal meaning of ‘punk’ is a loud, fast-moving, and aggressive form of rock music, which was popular in the late 1970s. However, in our context, punk fashion is defined as the type of clothing and other accessories, including cosmetics, jewellery, hairstyles, and body modifications (of the punk counterculture). Depending upon the geographic region, punk fashion varies widely. It ranges from Vivienne Westwood designs to styles modelled on bands like the exploited to the dressed-down look of North American hardcore.

This punk style is of the people of England. Mr. Vivienne Westwood is named as the punk’s creator. This punk is mostly found in the people who got influenced by the social and political conditions of an area. This punk has got its roots in the punk movement that happened in the early 1940s. This punk has got most of its influence from the Hippie movement. These punks behave very rudely against traditional beliefs regarding gender, family, and hierarchy. The founder of this punk fashion strongly believed in the ideology of D.I.Y, which means doing it yourself. He wanted people to make their fashion on their own. He wanted people to use the things which are around them to make fashion. He desired fashion to be accessible to everyone. This punk fashion is popular even now, but it also popped up on major runways and recent red carpet events. This punk fashion is considered an anti-fashion because it was created in response to the fashion consciousness that was made by the most popular bands such as the Sex pistols.

There are different types of punk fashion and these are some of them: garage punk, hardcore punk rock, glam punk, street punk, goth punk, state punk, and pop punk. In addition to this, some other styles are anarcho-punk, celtic punk, cowpunk, crust punk, dance-punk, dark cabaret and gypsy punk. These are the most popular punk styles that are known to most people. Let us dive into some of the information about those subdivisions.

This is considered the paving stone for punk fashion. As anti-establishment rap has gone viral, these individuals have devised a plan to instil the concept of punk fashion in the minds of the general public. The beginning parts of this garage punk are slim-fitting suits, velvet jackets, drainpipe jeans, and different kinds of boots.

This has to be the most daring outfit in punk fashion. During this fashion time, so-called punk-pop stars have gone to perform rap without clothes and sometimes by wearing dog collars and tight black jeans.

This glam rocker has stressed mostly glamour. This glam punk style gained popularity as a result of Malcolm McLaren’s design work on the New York Dolls in the late 1960s.

This trend was initiated by a person called Ramones. Hence, it is regarded as a true punk rock band. The punk music played by them is strongly accompanied by their street-styled ripped shirts, t-shirts, leather jackets, hoodies, and all.

This person’s style is known as the “street punk” style. This fashion has also dominated the underground scene. This punk look is a combination of casual and punk fashion, which mainly focuses on DIY fashion. This DIY is made on T-shirts, jackets, and plain clothing.

It is regarded as the most famous punk ever. Mr. Joe Armstrong is regarded as a goth icon as he is mostly remembered for his work in the establishment of this goth fashion. Many punk fashion followers must be thankful to him for his work and dedication.

This punk person tried a new adventurous music style in the late 1980s. That is mixing pop with the rock style of punk music. This has created some new catchy music and some new-age melodies.

During the performance of this new age music, they used to wear special kinds of dress that were part of punk fashion. Some of them are converted t-shirts, sneakers, and all.

Punk fashion is fashion that follows the punk counter-culture. People who wear this kind of dress are usually in the mood to make a statement that is against administrative views. The people who follow this fashion always use this fashion as a way to make their mark in society and try to leave a statement.