Folk costumes have played an essential symbolic role in the preservation of particular societies’ values and cultural heritage. It also helps in the development of a public sense of community. Folk clothing evolved over time in response to a variety of traditions as well as specific climatic and socioeconomic conditions. 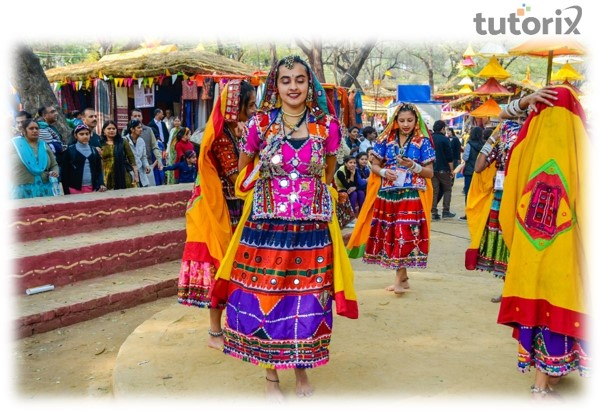 What is the Meaning of Folk Fashion?

A folk costume is a type of costume that uses clothing to convey an identity, usually one associated with a particular geographic location or period in history. It also represents a person’s marital, social, or religious status. The term “ethnic costume” refers to a costume worn to express the culture or identity of a specific ethnic community (also called ethnic dress, ethnic wear, ethnic clothing, traditional ethnic wear, or traditional ethnic garment).

As opposed to prior eras, folk costumes are now worn only during performances or on festive occasions, as opposed to prior era. However, they are not exclusively used as celebratory clothing. It consists of centuries of accrued and persistently renewed national aesthetic sensibility, ornamentation, and artisanal skills. It grew over many centuries as a result of making clothes and following tradition.

Indian clothing has been evolving for a very long time. In fact, the first evidence of spinning and dyeing cotton textiles was discovered in antiquity, in the Indus Valley culture. Its inhabitants left clues about Indian customs, culture, and fashion through grandiose rock sculptures. The world-famous Ellora caves and epic sagas like the Mahabharata over the years. In fact, clothing has a rich history in India, just like food, religion, or even cricket.

Since its inception, the subcontinent has produced a vast array of finely woven clothing, with distinct male and female styles found everywhere. Aside from gender and location, caste and class have most strongly defined Indian attire.

Traditional clothing use in India has declined over time due to foreign influences such as trade along the Silk Road, British colonialism, and Western standardization. The country’s historic customs, on the other hand, are still very much alive and well, and they can be seen on the proud traditional citizens who still wear them on their bodies.

On the other hand, Bibhu Mohapatra, a women’s luxury designer, draws maritime tattoos in a sketchbook. These illustrations, which appeared in the waterproof pages of a ship’s log, served as a portable reference for tattoo samples, which the anonymous owner could presumably etch onto his fellow seamen. Mohapatra projects his own narrative onto the sketches, imagining an alienated sailor as an outsider artist. “The tattoo book is fundamentally the only kind of interaction he has with the sea, which is a big, vast wall of emptiness and solitude,” he says. Propped open, the book depicts a reclining man on board a ship. The woman he fantasies about appears on the ship’s sails, but only in his mind. Mohapatra concludes the story with a fleur-de-lis lace bodysuit outlining the black indelible ink on a sailor’s body. A cerulean organza sash draped over the mannequin creates the illusion of fluidity and buoyancy while embracing the female figure. Only in this one-of-a-kind locale of folk couture can the designer give the wearer of his garment symbolic meaning and function—she becomes the sea bride.

Till date, the segments of Carreno’s exhibition have closely matched fashion jargon—pattern. A template used to create a large number of matching garments, and narrative, clothing derived from a story or basically dramatizing one (costume being the primary example). Furthermore, designers Ronaldus Shamask and John Bartlett abandon this terminology entirely in the exhibition’s “disembodiment” chapter, where they experiment with function and wearability. Both of these designers detached the body from the garment, which is an uncommon practice in their industry.

The power and simplicity of James Castle’s work struck Shamask accepted as a self-taught outsider artist from rural Idaho, the United States. His body of work consists of “found objects.” Shamask has created complete dresses with sharp kimono sleeves, which look and function are like kites. Further, it is strung from the museum’s ceiling, incorporating the earnest, “multipurpose” aspect of Castle’s work. On the other hand, John Bartlett designed a bespoke quilted jumpsuit with “fairytale proportions.” It is measuring 10 feet tall and as green as Jack’s beanstalk. Bartlett’s jumpsuit, inspired by an anonymously crafted wooden figure of a slender rural farmer, also hangs dramatically from wall to ceiling. The intangible presentation of this piece (it would be difficult to find an appropriately shaped mannequin) facilitates Bartlett to construct something unique.

From Class Differentiation to Collective Selection in Fashion, as stated by Herbert Blumer, fashion is a mechanism generated by needs. However, more often than not, the tastes of a consumer society also play an important role. These collective demands are not only competitive but also ephemeral. Because fashion keeps changing constantly. Amidst this, the folk fashion representing a particular society of a geographic region is largely creative, figurative, and relatively permanent in nature. But such fashions adopted by modern and educated people are, of course, short-lived. Further, Blumer’s social demands, however, vanish in the realm of "Folk Couture." These designers were given a one-of-a-kind opportunity to showcase their commercial skills while engaging in a non-exploitative dialogue with these powerful symbols of American identity. This innocence is a fundamental tenet of folk art as fashion.