Introduced by Karl Pearson, a histogram is an accurate representation of the distribution of numerical data which is an estimate of the probability distribution of a continuous variable (CORAL). It appears similar to bar graph, but, a bar graph relates two variables, whereas a histogram relates only one.

A histogram requires bin (or bucket) which divides the entire range of values into a series of intervals—and then count how many values fall into each interval. The bins are usually specified as consecutive, non-overlapping intervals of a variable. The bins must be adjacent, and are often of equal size. A rectangle is erected over the bin with height proportional to the frequency—the number of cases in each bin.

Histogram trace object is returned by go.Histogram() function. Its customization is done by various arguments or attributes. One essential argument is x or y set to a list, numpy array or Pandas dataframe object which is to be distributed in bins.

By default, Plotly distributes the data points in automatically sized bins. However, you can define custom bin size. For that you need to set autobins to false, specify nbins (number of bins), its start and end values and size.

The output is as shown below − 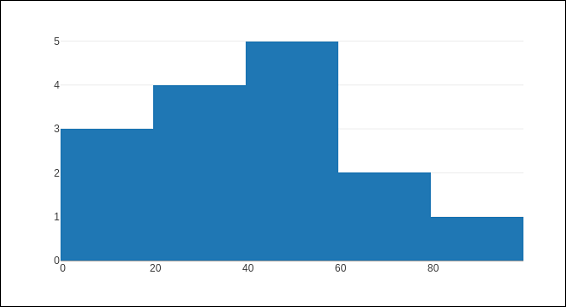 There is also histfunc parameter whose default value is count. As a result, height of rectangle over a bin corresponds to count of data points. It can be set to sum, avg, min or max.

The histogram() function can be set to display cumulative distribution of values in successive bins. For that, you need to set cumulative property to enabled. Result can be seen as below −

The output is as mentioned below − 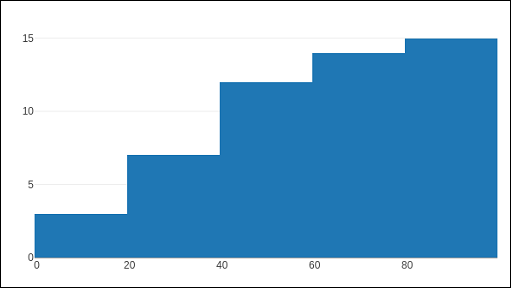