There also existed “jump” or “skip” muxes that would allow multiplexing of 16 2 M signals into a 34 M signal without the intermediate 8 M level.

Synchronisation − The data is transmitted at regular intervals. With timing derived from the transmitter’s oscillator, the data is sampled at the same rate as it is being transmitted.

Or, if the receiver clock was running faster than that of the transmitter, the receiver would sample some of the bits twice. 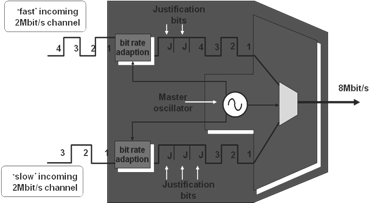 Because of the synchronization methods that were used, it was impossible to de-multiplex from a high order signal to the lowest order tributary signal in one piece of equipment. It was necessary to de-multiplex at all levels to access the signal that was being dropped at a site and then re-multiplex all the other channels back up to the higher rate. This meant that there had to be a lot of equipment on the site to accomplish this. This is known as the PDH Mux Mountain. All this equipment took up a lot of space on the site and also increased the need for spares to be held on sites.

Lack of resilience in PDH networks meant that if a fiber break occurred, the traffic would be lost. PDH network management simply reports alarms to NOC operators. No diagnosis or remedial tools are available to NOC staff. A maintenance engineer need to be sent on the site with a minimum amount of information. Each network element requires a connection to the DCN network as no facilities exist to carry management information across the PDH network.

Lack of standards for interconnection meant that it was not possible to interconnect equipment from multiple vendors. Equipment could operate on different wavelength, use different bit-rates, or proprietary optical interfaces.