So far, we have been concentrating only on one voice channel. Now, we need to combine a number of these channels into a single transmission path, a process known as multiplexing. Multiplexing is a process employed whereupon several channels can be combined, in order for them to be transmitted over a single transmission path. The process commonly in use in telephony is known as Time Division Multiplexing (TDM).

As we have seen before, sampling for one channel takes place every 125 micro seconds. This makes it possible to sample other channels during this period. In Europe, the time span is divided into 32 time periods, known as timeslots. These 32 timeslots can then be grouped together to form a frame (see the following figure).

Consequently, the time duration of a frame can be considered as 125micro seconds. It can now also be assumed that as each timeslot consists of 8 data bits, and is repeated 8000 times a channel rate of 64000 bits per second or 64Kbits is attainable. With this information it is now possible to determine the total number of data bits transmitted over the single path, known as the system bit rate. This is calculated using the following formula − 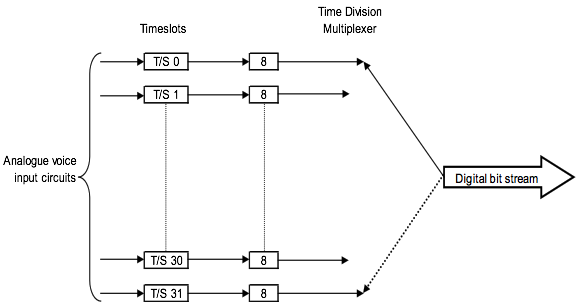 Of the 32 channels available, 30 are used for speech transmission, and the remaining 2 timeslots are used for alignment and signaling. The following section will explain the function of all the timeslots.