The human brain is enormous compared to other mammals and one of its most visible structural features. As brain size significantly shrinks, cognitive abilities deteriorate. The most dramatic example of this is Microcephaly, a condition where the brain shrinks to one-third of its original volume while also showing a severe loss in cognitive function. 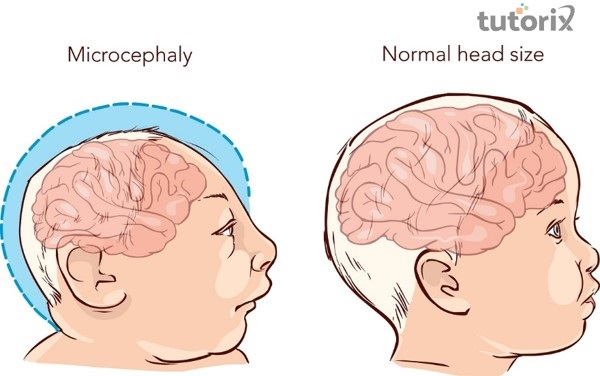 A head circumference more than two standard deviations (SD) below the mean for gender and age is referred to as Microcephaly, affecting roughly 2% of the population. Or in other words, it is a medical condition where a baby's head is smaller than the normal size of same age group.

According to other studies, severe Microcephaly is defined as being more than three SD below the mean, which affects 0.1% of the population. It has no known cure and is a lifelong ailment. Children with an intrauterine infection or chromosomal or metabolic abnormalities typically had a worse prognosis. One in every 30,000 to 250,000 newborns worldwide is born with Microcephaly, which corresponds to approximately 2 per 10,000 to 12 per 10,000 live births in the United States.

Microcephaly is a developmental brain abnormality characterized by a congenital reduction in head circumference of at least two standard deviations (SD) below ethnically matched, age- and sex-related mean and varying degree non-progressive mental impairment in the absence of any substantial neurological deficit. Rarely do patients with Microcephaly have normal intelligence. Most people are manageable and can learn a variety of self-help techniques. Many times, but not always, it is discovered that a nondescript sloping forehead is related to the condition. Seizures and epilepsy are more common in people with ASPM mutations, but they are rare in patients affected by other genes and are no more common than in the general population.

Both congenital and postnatal Microcephaly can be brought on by genetic anomalies, syndromes, metabolic diseases, teratogens, infections, and prenatal, perinatal, and postnatal traumas.

The major sign of microcephaly is having a substantially smaller head size than other children of the same age and gender. The distance around the top of the child's head is measured in head size (circumference). Healthcare practitioners use standardized growth charts to compare the measurement to other children's measures in percentiles. Some children have tiny skulls, with a measurement that is less than the accepted value for children their age and gender. Head size in children with microcephaly is smaller than typical for their age and gender. Other symptoms include −

Reduced neuronal activity in the developing neocortex is the usual cause of congenital Microcephaly. There are various reasons why patients develop fewer neurons. These neurons may experience increased cell death, an imbalance between progenitor and differentiating cells (i.e., changes in the ratio of asymmetric vs. symmetric cell divisions), alterations in the timing of the cell divisions, or aberrant differentiation.

A comprehensive history and physical examination are the first steps in evaluating patients with Microcephaly. Neuroimaging, metabolic, or genetic tests should be strongly explored when Microcephaly or neurological symptoms are worsening. The initial diagnostic procedure used to assess children with Microcephaly is frequently magnetic resonance imaging (MRI) of the brain. When a diagnosis cannot be made based on the history or physical examination alone, genetic testing is increasingly popular and is frequently performed after neuroimaging.

Microcephaly is a chronic illness for which there is no known treatment. Children with an intrauterine infection or chromosomal or metabolic abnormalities typically have a poor prognosis. Depending on the etiology and severity, children with microcephaly can have various difficulties. Among them are intellectual impairment, developmental delay, epilepsy, cerebral palsy, and ophthalmologic and audiological problems. According to retrospective research, 65% of children with microcephaly had an intellectual disability, 43% had epilepsy, and 30% had ophthalmological problems.

Although there is no specific therapy or intervention that can enhance cerebral growth, timely intervention techniques and programs can be designed to enhance motor and neurocognitive development and offer genetic counseling.

The term "macrocephaly," which can be brought on by an increase in the size of any intracranial contents, is commonly used to describe a head circumference more than two standard deviations above the mean. Contrarily, Microcephaly is defined as a head circumference that is more than two standard deviations below the mean for gender- and age-based standards.

The Zika virus (ZIKV) outbreak in the Americas in 2015-17 resulted in an unexpected rise in children born with Microcephaly and other neurological manifestations associated with severe brain lesions such as brain disruption, microcalcification, eye impairment, hypertonia, and arthrogryposis. This set of signs and symptoms was dubbed Congenital Zika Syndrome (CZS). Children with CZS experience a wide range of functional problems and structural brain anomalies due to damage to the central nervous system. The most prevalent symptom in 80% of CZS patients is Microcephaly. ZIKV infection was linked to serious outcomes in fetuses and children, particularly in the first trimester of pregnancy. The effects of CZS extend beyond the lives of the affected children to include their community, family, and primary caregivers, typically their mothers. The latter are more vulnerable to anxiety and depression because of the challenges they face in providing their children's specialized care. Most mothers with children with Microcephaly endure stigmatization and abandonment from their spouses, family members, and communities, which causes them substantial emotional and psychological pain. Furthermore, it has been claimed that their mental health deteriorates over time.

Despite advancements in genetics, Microcephaly is a diverse illness that has proven difficult to diagnose. Understanding the genetics and cell biology of the disease is, therefore, necessary to hasten its identification and genetic diagnosis. A working clinical diagnosis should guide the study into the microcephalic infant, or diagnostic category, obtained from the history and examination. It is important to look for and, if possible, establish non-genetic causes of Microcephaly. Tracking and reporting a genuine incidence of Microcephaly is challenging due to underreporting and inconsistent study definitions. Identifying the underlying cause of Microcephaly will aid in developing preventative studies for this illness. Additionally, it can give patients and their families the tools they need to organize early interventions and predict their prognosis.