In general, statements in a program are executed sequentially: The first statement in a function is executed first, followed by the second, and so on. There may be a situation when you need to execute a block of code several number of times. Statements that provide such repetition capability are called looping statements.

In Jython, a loop can be formed by two statements, which are −

A while loop statement in Jython is similar to that in Java. It repeatedly executes a block of statements as long as a given condition is true. The following flowchart describes the behavior of a while loop. 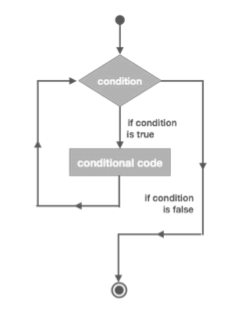 The general syntax of the while statement is given below.

The following Jython code uses the while loop to repeatedly increment and print value of a variable until it is less than zero.

Output − The output would be as follows.

The FOR loop in Jython is not a counted loop as in Java. Instead, it has the ability to traverse elements in a sequence data type such as string, list or tuple. The general syntax of the FOR statement in Jython is as shown below −

We can display each character in a string, as well as each item in a List or Tuple by using the FOR statement as shown below −

Output − The output would be as follows.

Let us consider another instance as follows.

Output − The output will be as follows.

Here is another instance to consider.

Output − The output of the above program is as follows.

The start and step parameters are 0 and 1 by default. The last number generated is stop step. The FOR statement traverses the list formed by the range() function. For example −

It produces the following output −