How to determine device type (iPhone, iPod Touch) with Swift?

When working on iOS applications, we sometimes need to know the device on which application is installed, and provide custom features depending on the device in use. For example, we want to provide some features on iPhone X but not on iPhone 7. In this article we’ll learn how to find the iOS device being used, using an iOS Application.

Let’s go through some terms that will be required for achieving the desired results,

utsname − this is a structure located in Darwin module of iOS

uname − uname is a function that takes utsname as an input and returns Int32 as output.

Mirror − A representation of the substructure and display style of an instance of any type.

Finding the device in use on iOS SDK is a simple task, if we just need to find the model or the name we can use any of the below codes, and it will give us a string in return.

In Swift we’ll use all of the above mentioned terms to get device number as an output.

This function gives us the model code but not exactly the device name. We’ll have to compare this “identifier” variable against multiple values to get model name as per the requirement. 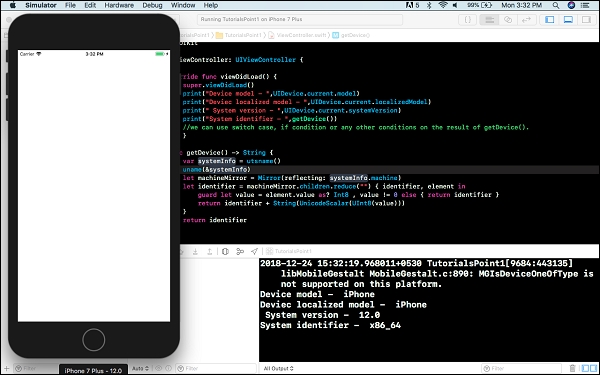