Ever Wondered Why do we celebrate Dasara after Nine Days of fast and Worship Goddess Durga?

The entire country is celebrating Navratri with utmost zeal and enthusiasm. Fasts, pooja, Arathi, Garba dances and Dandiya ... there is festival fervor all over India and all over the world among Hindus. This is the longest festival for Hindus.

Let's take a look at the connection between Navratri and Dasara. Goddess Durga killed Mahishasur, the demon after fighting with him for nine days and nine nights. The tenth day is celebrated as Vijaya Dasami, also known as Dussehra or Dasara to signify the victory celebrations. This is the reason it is called Vijaya Dasami -- Vijaya meaning victory and Dasami, the tenth day. The feminine power is worshipped and celebrated during this major festival of Hindus.

Dasara festival signifies the end of evil and triumph of Maa Durga. The feminine power is worshipped and celebrated during this major festival of Hindus.

One more mythological story associated with Dasara is, on this day Lord Sri Rama killed Ravana and gets back Devi Sita to Ayodhya.

During the Navrathri, devotees solemnly fast and worship the nine manifestations or forms of Goddess Durga. Each day of Navrathri is associated with one planetary body and each day, one form of Goddess Durga is worshipped.

According to the Hindu traditions, Maa Shakti manifests herself as Mahasaraswati, Mahalakshmi and Mahakali who are the active energies of Brahma, Vishnu and Mahadev respectively. Further, these three forms of Shakti manifests into three more each, thus total nine forms of Maa Durga worshipped during Navrathri as Navadurgas. Nav denotes number nine in Sanskrit. These are the forms of Goddess Durga worshipped as Navadurgas during Navratri. 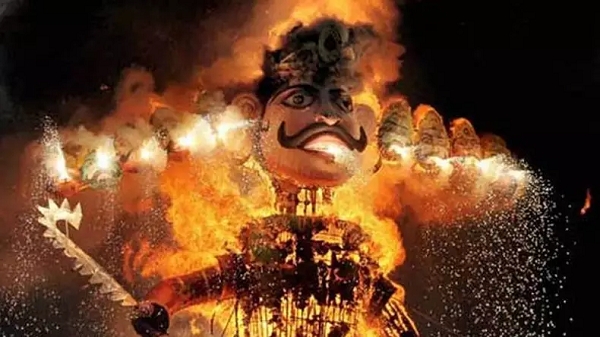 Vijaya Dasami is the biggest festival for Hindus. People celebrate the festival in different colors across the country. Plays based on Ramleela are performed and on the day of Vijaya Dasami huge effigies of Ravan and Kumbhkaran are stuffed with firecrackers and set on fire, to mark the end of evil.

Many people believe that whatever new things you start during Dasara will give you success. People in South India start their first lessons on scriptures, music, and instruments like tabla, harmonium, veena, violin etc on the day of Dasara.