Climate refers to the usual weather of a place. Climate differs from season to season, from region to region. A combination of all the climates of the world is termed as the Earth’s climate.

Climate change refers to a change or changes in the usual weather condition found in a place or region. Changes could be experienced in the rainfall or snowfall pattern, temperature, etc. Climate change is also a change in Earth’s climate.

Climate change is now a much-discussed concept around the globe. It is because it is now experienced that the world temperature is increasing during these years. The global average surface temperature is believed to have increased by 0.6° + 0.2° C over the last century. Globally, 1998 was the warmest year and the 1990s was the warmest decade on record. 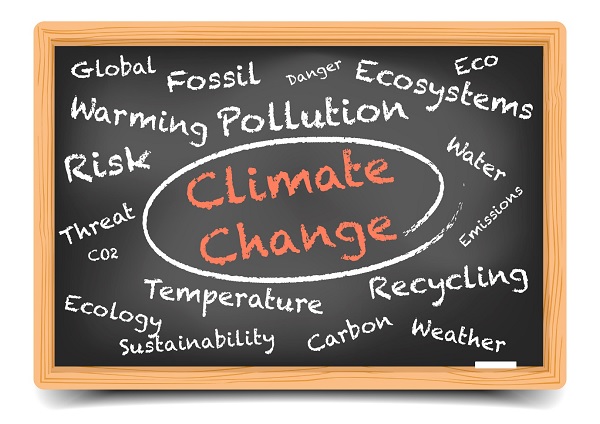 Many countries have experienced increases in rainfall, particularly in the countries situated in the mid to high latitudes. In some regions, such as parts of Asia and Africa, the frequency and intensity of droughts have been observed to increase in recent decades.

Episodes of El Nino, which creates great storms, have been more frequent, persistent, and intense since mid-1970s compared with the previous 100 years. All these signs show that the earth’s climate is changing, making it more difficult for mankind to survive.

Climate changes on its own in nature. Earth’s distance from the sun, volcanic eruption at large scale, heavy rainfall for longer period, are the instances of natural phenomena that influence the Earth’s climate. These are natural and have nothing to do with our present concern about climate change.

What concerns us today is the rise in global temperature, especially. Most scientists say that human activities have caused certain changes in the natural climate of the earth.

Most scientists agree that the main cause of current global warming is human expansion of the ‘greenhouse effect’. Greenhouse effect is the increase in the number of certain gases that include, carbon dioxide (CO2), methane, nitrous oxide (N2O), water vapor, chlorofluorocarbons (CFCs), etc.

The above phenomenal changes directly and indirectly affect the physical, social, and psychological health of human beings.

Changes in precipitation create changes in the availability and quantity of water and also results in extreme weather events, such as intense storms, flooding and droughts. Frequency in all these weather phenomena sometimes lead to human causality in great proportion apart from huge loss of property, mostly in developing and underdeveloped countries.

Climate change affects the prerequisites of human health such as clean air and water, sufficient and healthy food, natural constraints to infectious disease agents and the adequacy and security of shelter.

The report of the WHO Commission on Social Determinants of Health points out that disadvantaged communities are likely to shoulder a disproportionate share of the burden of climate change because of their increased exposure and vulnerability to health threats.

Climate change effects such as desertification, rising sea levels and severity of weatherrelated disasters along with the spread of epidemics can destroy or affect human habitation causing people to seek shelter elsewhere.

Deteriorating environment and depleting resources can result in human conflicts at all levels. The Intergovernmental Panel on Climate Change (IPCC) has estimated that there will be over 150 million environmental migrants by 2050 and the number will be perplexing due to complexity of the issue and lack of data.

Apart from the above, following are some other consequences of climate change −

Population Explosion & its Pressure on Environment

Most resources being finite since the very beginning and natural limit to resource generation being slow, constant rise in the number of people on the earth exerts undue pressure on world resources.

Population growth and the resultant increase in human habitations in the last couple of centuries has taken away a considerable portion of natural vegetation, cultivable lands, and above all the natural habitats of wild animals. There has been loss of biodiversity and resultant ecological imbalance in severity in the current times.

With the advent of science and technology man’s need for comfort and luxury has multiplied many times. This has necessitated the production of a great number of goods and services in the world.

Not only the huge population (7.4 billion in 2016), but also the lifestyle, consumption patterns in modern time directly affect the environment. More people demand more resources and generate more waste. Clearly one of the challenges of a growing population is that the mere presence of so many people sharing a limited number of resources strain the environment.

Rapid urbanization and industrialization during the last century in most part of the world has not only destroyed a substantial part of natural vegetation but also forced many wild animals on the verge of extinction.

Apart from the pressure on the resources due to high growth in population, technological and scientific innovations, rapid rise in automobile population, electronic gadgets, machinery and equipment have added a great number of pollutants to the environment. As a result, environmental degradation has risen to an irrecoverable level.

Nonetheless, sustainable development can be pursued more easily when population size is stabilized at a level consistent with the productive capacity of the ecosystem.

Consumption, although necessary for the economy, can be hazardous to the environment. Consumerism is a social and economic order that supports and encourages the acquisition of goods and services in ever increasing amounts.

Man has developed an unprecedented craze for a mushrooming number of products and services available in the world market. This has been aggravated by improved marketing strategies, alluring advertisements, and consumer-friendly services offered by companies and outlets.

Consumerism has become more acute in developing countries such as India and China than that in developed countries due to the rise in population in the former.

Increasing consumerism has led to excessive production of goods and services, which in turn has led to enormous pressure on natural environment and natural resources. Resource depletion, environmental degradation, and pollution have become the order of the day. Mankind has reached the height of environmental pollution from where it seems very difficult to return. Race for comfort and luxury has vitiated the environment disproportionately.

Excessive demand for consumer products has created most of the current environmental imbalances and these imbalances have already caused ecological disaster in different places all over the world.

Consumerism has resulted in heaps of waste in urban and also in rural areas which lead to a pollution of environment. Mounting e-waste in the world, especially in developed countries, is causing more harm to the environment. Popularity of plastic for various purposes is adding severely to air, water, and land pollution.