When a query is placed, it is at first scanned, parsed and validated. An internal representation of the query is then created such as a query tree or a query graph. Then alternative execution strategies are devised for retrieving results from the database tables. The process of choosing the most appropriate execution strategy for query processing is called query optimization.

In DDBMS, query optimization is a crucial task. The complexity is high since number of alternative strategies may increase exponentially due to the following factors −

Hence, in a distributed system, the target is often to find a good execution strategy for query processing rather than the best one. The time to execute a query is the sum of the following −

Query processing is a set of all activities starting from query placement to displaying the results of the query. The steps are as shown in the following diagram − 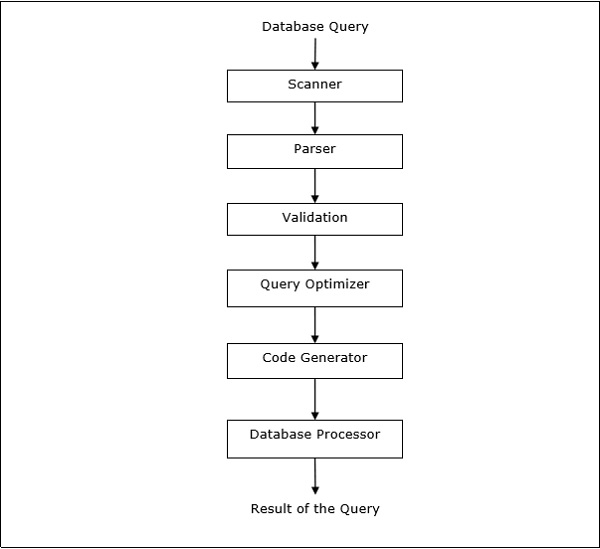 The basic operations are −

Projection operation displays a subset of fields of a table. This gives a vertical partition of the table.

For example, let us consider the following Student database −

If we want to display the names and courses of all students, we will use the following relational algebra expression −

Selection operation displays a subset of tuples of a table that satisfies certain conditions. This gives a horizontal partition of the table.

For example, in the Student table, if we want to display the details of all students who have opted for MCA course, we will use the following relational algebra expression −

Combination of Projection and Selection Operations

For most queries, we need a combination of projection and selection operations. There are two ways to write these expressions −

For example, to display names of all female students of the BCA course −

For example, to display all students who are either in Semester 1 or are in BCA course −

For example, given the following two schemas −

For example, to list all the departments which do not have an ongoing project (projects with status = ongoing) −

For example, consider two schemas, Customer and Branch in a Bank database as follows −

To list the employee details along with branch details −

Let us consider the following schemas −

To display the details of all employees who earn a salary LESS than the average salary, we write the SQL query −

This query contains one nested sub-query. So, this can be broken down into two blocks.

The inner block is −

If the result of this query is AvgSal, then outer block is −

To display the project ID and status of all projects of employee 'Arun Kumar', we write the SQL query −

This query contains two nested sub-queries. Thus, can be broken down into three blocks, as follows −

(Here ArunEmpID and ArunPID are the results of inner queries)

Relational algebra expressions for the three blocks are −

The computation of relational algebra operators can be done in many different ways, and each alternative is called an access path.

Since the time to process a tuple is very much smaller than the time to fetch the tuple from the storage, particularly in a distributed system, disk access is very often considered as the metric for calculating cost of relational expression.

Computation of selection operation depends upon the complexity of the selection condition and the availability of indexes on the attributes of the table.

Following are the computation alternatives depending upon the indexes −

The common approaches for computing joins are −

This is the conventional join approach. It can be illustrated through the following pseudocode (Tables P and Q, with tuples tuple_p and tuple_q and joining attribute a) −