In a distributed database system, processing a query comprises of optimization at both the global and the local level. The query enters the database system at the client or controlling site. Here, the user is validated, the query is checked, translated, and optimized at a global level.

The architecture can be represented as − 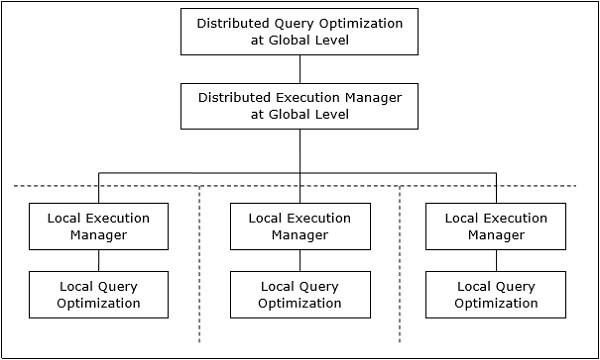 For example, let us consider that the following Project schema is horizontally fragmented according to City, the cities being New Delhi, Kolkata and Hyderabad.

Suppose there is a query to retrieve details of all projects whose status is “Ongoing”.

The global query will be &inus

Query in New Delhi’s server will be −

Query in Kolkata’s server will be −

Query in Hyderabad’s server will be −

In order to get the overall result, we need to union the results of the three queries as follows −

Distributed query optimization requires evaluation of a large number of query trees each of which produce the required results of a query. This is primarily due to the presence of large amount of replicated and fragmented data. Hence, the target is to find an optimal solution instead of the best solution.

The main issues for distributed query optimization are −

Optimal Utilization of Resources in the Distributed System

A distributed system has a number of database servers in the various sites to perform the operations pertaining to a query. Following are the approaches for optimal resource utilization −

Data Shipping − In data shipping, the data fragments are transferred to the database server, where the operations are executed. This is used in operations where the operands are distributed at different sites. This is also appropriate in systems where the communication costs are low, and local processors are much slower than the client server.

Hybrid Shipping − This is a combination of data and operation shipping. Here, data fragments are transferred to the high-speed processors, where the operation runs. The results are then sent to the client site. 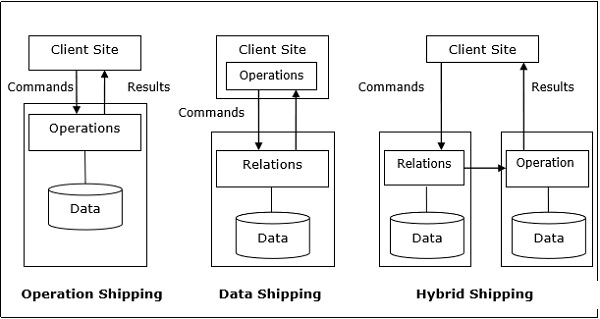 In query trading algorithm for distributed database systems, the controlling/client site for a distributed query is called the buyer and the sites where the local queries execute are called sellers. The buyer formulates a number of alternatives for choosing sellers and for reconstructing the global results. The target of the buyer is to achieve the optimal cost.

The algorithm starts with the buyer assigning sub-queries to the seller sites. The optimal plan is created from local optimized query plans proposed by the sellers combined with the communication cost for reconstructing the final result. Once the global optimal plan is formulated, the query is executed.

Reduction of Solution Space of the Query

Optimal solution generally involves reduction of solution space so that the cost of query and data transfer is reduced. This can be achieved through a set of heuristic rules, just as heuristics in centralized systems.

Following are some of the rules −