CRC stands for Cyclic Redundancy Check (CRC). It is, in simple words, an algorithm used to detect errors in received messages. The idea is similar to parity, but this is much more robust.

How exactly CRC works is beyond the scope of this article. There are libraries available for performing CRC calculations in Arduino. Here is an example. AVR also has a native CRC library.

You are free to explore these libraries. However, we won't be using any of these. Instead, we'll write a function from scratch to return the 16-bit CRC for an array of bytes. The implementation is going to be Fletcher's checksum. It is quite robust, and even detects if the data is ordered incorrectly. Also, the algorithm is quite easy to implement −

The Serial Monitor Output is 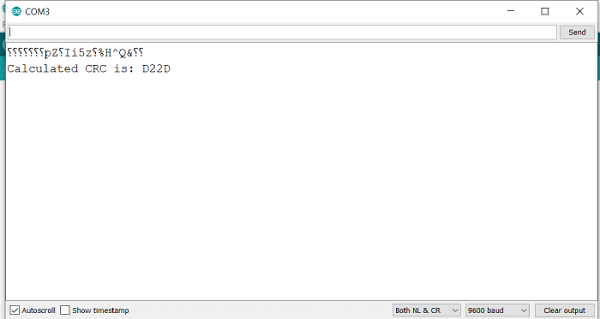 As you can see, we have used 0x0000 as the initializer. You can use a different initial value, provided both receiver and transmitter follow the same convention.