ChemistryElements of the Periodic Table

The elements of Group 13 (III A) are boron (B), aluminium (Al), gallium (Ga), indium (In), and thallium (Th) (Tl). Due to the existence of three valence electrons, these elements are also known as earth metals and triels. The outer shell electronic configuration of Boron can be written as $\mathrm{1s^2\:2s^2\:2p^1}$. In the following sections we would discuss the occurrence, physical and chemical properties of Boron.

Occurrence and Extraction of Boron

Because the p-electrons are less tightly bound than the s-electrons, the first IE of Group IIIA elements is lower than that of Group 2 elements. The values of the first three ionisation energies for Boron is shown in Table. In comparison to the first IE, the second and third IEs are higher. Boron, as predicted, has the greatest IE value.

Because to its small ionic size and high IE, boron produces highly covalent compounds. Owing to the same reason Boron is a typical non-metal.

Boron has an interesting icosahedral structure, with $\mathrm{B_{12}}$ as the basic unit. Except for Ga, the other elements have a metal structure that is closely packed. As a result, the melting and boiling temperatures of B are quite high. 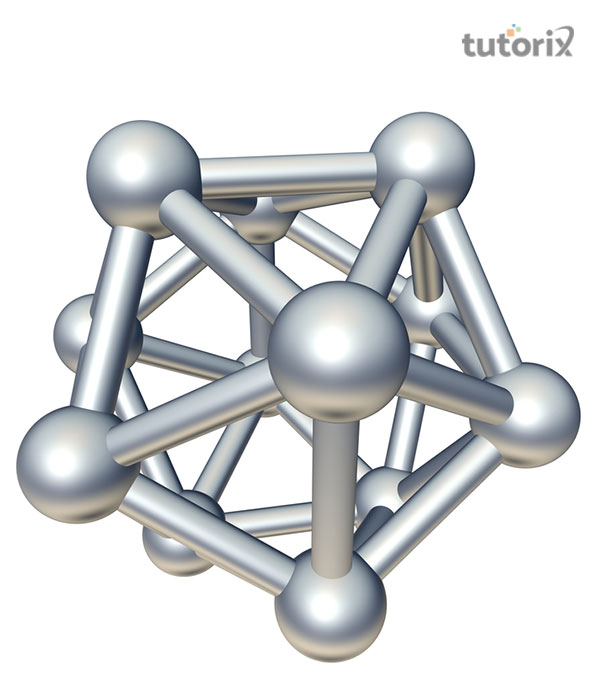 Diagonal Relationship Between Boron and Silicon

Reaction with Air and Water

Boron is highly unreactive in its pure crystalline state, but it is quite reactive in its finely split amorphous state. It produces $\mathrm{B_2O_3}$ when heated in air, and BN is created at extremely high temperatures. With $\mathrm{H_2O}$, it does not react.

Reaction with Acid and Bases

Boron liberates $\mathrm{H_2}$ from fused caustic alkalis, resulting in the formation of borates

Boron is a member of Group IIIA in the periodic table. Pure crystalline boron is a black, glossy semiconductor, which conducts electricity like a metal at high temperatures but acts as a near-insulator at low temperatures.

Q1. State the similarities between Boron and Silicon.

Ans: The similarities between Boron and Silicon are as follows:

(i) Both of these elements are only found in their combined condition in nature. They do not occur freely.

(ii) Both amorphous and crystalline forms occur for these elements

(iii) Because of their high IE, both of these elements are nonmetals and insulators.

Q2. How does boron react with alkalis?

Ans: Boron trioxide is reduced by heating to intense redness with Na, K, or Mg powder. After boiling the boron with strong hydrochloric acid to dissolve the magnesium oxide, dark brown boron in its amorphous condition is produced.

Q4. What are the physical properties of Boron?

Ans: The physical properties of Boron are as follows:

(ii) It has a specific gravity of 2.34 and is brown in its amorphous condition.

(iii) With a specific gravity of 3.3, its crystalline form is very durable and heat resistant.

Q5. What is the general outer shell electronic configuration for Group III A elements?