An approach for evaluating reaction energy is the Born–Haber cycle. It was created in 1919 by two German chemists, Fritz Haber and Max Born, and named after them. It clarifies and aids in the understanding of how ionic compounds are formed. Because lattice energy can't be measured directly, it's mostly utilised to compute it. The Born-Haber cycle is a method of applying Hess's Law to the usual enthalpy changes that occur during the formation of an ionic molecule. The enthalpy change is a thermodynamic quantity that describes the lattice energy of ionic compounds.

The lattice energy is affected by -

The greater the lattice energy, the closer the ions are together and the larger their charges are. We utilise an indirect approach termed a Born- Haber cycle to obtain lattice energies because it is difficult to detect them directly by experiment.

The following steps are involved in Born-Haber cycle:

(a) If necessary, converting solid/liquid reactants to gaseous state

c) The ionic solid is formed by combining gaseous ions. Let us consider the production of MX, an ionic solid, in which M is an alkali metal and X is a gaseous halogen.

The preceding steps could be further explained in the following manner:

It is an endothermic reaction; hence the value is positive.

This is an endothermic process, thus the value assigned to it is positive.

This is an endothermic process as well, and its value is a positive.

Thus, this is an exothermic reaction, and its value is calculated to be negative number.

The ionic crystal's lattice energy may thus be determined utilizing the values of other terms of energy. 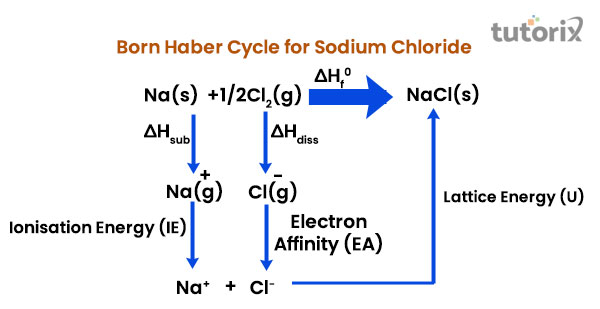 We'll see in this section; values of lattice energy are utilised to describe the characteristics of crystals of ionic solid.

The solubility of an ionic solid is determined by two factors:

As a result, if the magnitude of the solvation energy is greater than the lattice energy, the solid would dissolves into the solvent; otherwise, the solid is insoluble in the solvent.

If the ionisation energy exceeds the lattice energy, implying that the overall production of the compound is an endothermic process, the resulting compound will be unstable and so unlikely to exist.

Q1. When do you observe discrepancy in lattice energy values calculated from Born Haber Cycle?

Ans: The difference between observed and calculated values of Born Haber Cycle occurs when:

Q2. How does Lattice energy effect the melting point in metal halides?

Ans: The higher the lattice energy, the more energy is required to separate the ions, and therefore the melting point of the ionic solid rises.

The melting point of metal halides follows the order

Q3. What is the criteria for ionic solids to be soluble in water?

Only those ionic solids with a higher hydration energy than the lattice energy are soluble in water.

Ans: According to Hess's Law, when a reactant is transformed to a product, the change in enthalpy is the same whether the reaction occurs in one step or several stages. Hess's law is used to compute lattice enthalpy in the Born Haber Cycle.

Ans: The lattice energy (U) can be defined as the enthalpy required to dissociate one mole of crystalline solid in its standard state into the gaseous ions from which it is made.