An anecdote of a 51−year−old−right−handed woman has been presented. She was seated next to her desktop when she suddenly went faint as if some of her left arms had vanished. To her amazement, she could have seen the desk on which her left arm was resting as if it was transparent, but she could not make out the top or its distinct border. Her left arm and hand were immobile. After a few minutes, the patient's left hand and arm gradually began to heal, beginning laterally, then medially, with two holes remaining in the center of her hand. She became able to move her arm after some time when the two holes eventually fused to make the arm whole once more. No other bodily functions or aspects of the intervillous realm were felt to have altered. 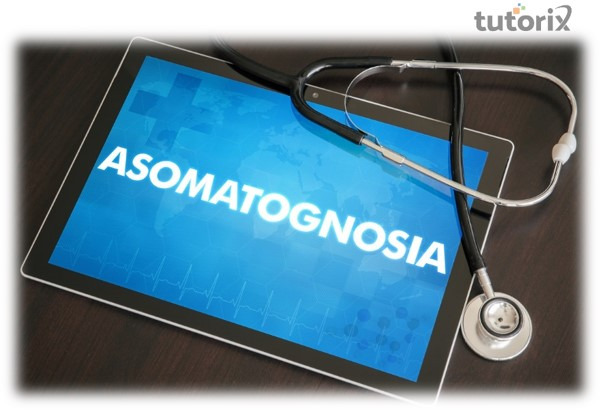 Asomatognosia is the belief that one's body is no longer present. Hemiasomatognosia, which most frequently affects only one side of the body (typically the left), is characterized by a feeling that nothing exists to the left of the body's midline. In most cases, this experience is physical, meaning that the impairment is somesthetic ("pure asomatognosia"). However, it may also incorporate the visual paradigm. As a result, a patient may feel as though the right half of her body is missing but may be able to dispel this somesthetic impression by gazing at and recognizing the missing side (somesthetic, but no visual asomatognosia). On the other hand, a patient with a right thalamic tumor found that their perception of a missing left hemibody was validated when they checked the empty body space and could not see their left side (somesthetic and visual asomatognosia).

After experiencing injuries to the right hemisphere, people with this syndrome frequently fail to recognize and feel their left arm. A woman with asomatognosia once attempted to toss her left arm into a trash can because she thought her husband's arm was slapping her repeatedly and disturbing her sleep. Several patients will continue to insist that the part of the body is not a portion of oneself, even after being informed that it is theirs. For example, a patient with severe asomatognosia could use his right hand to detect his paralyzed left arm to his left shoulder, but he refused to recognize that the left arm conformed to him. In general, it is an interesting occurrence when people insist that a physical portion belongs to a member of their family who is of the opposite gender. Women with asomatognosia, for instance, assert that their left arm belongs to a man (i.e., their husband). In contrast, men frequently assert that their arm belongs to a woman (i.e., his daughter or wife). Additionally, some patients handle their arms like a child or little animals.d

Ironically, the defining quality of our body's normal perception is that we are oblivious to it. Normally, we are completely unaware of the incredible, intricate mechanisms our bodies employ to give us a sense of our bodies. A state of diminished or absent bodily consciousness is known as asomatognosia. Body knowledge affects every system; very few cognitive domains are unaffected.

Somatoparaphrenia can be distinguished from straightforward asomatognosia by the presence of orbitofrontal dysfunction. The information suggests that self−related, and confabulation systems involve the right medial and orbitofrontal areas.

After suffering from a stroke or some neuropsychiatric event, a patient's general outlook may differ. They act as though nothing has changed and are unconcerned with the obvious changes they have endured. They justify their new emotions and sensations as facts (for example, "This hand is not mine; it is my mother's") and are delusional about them.

Right hemisphere stroke patients who lose knowledge of their bodies may perceive one half as weird, altered, or alien. Whatever weird feelings they may have, they should be critical of (or even lucid about) them and comparatively explain them.

Making an asomatognosia diagnosis based on verbal reports and behavioral observation is preferable. Verbal surveys, observation rating scales, self−rating scales, normal and skewed mirrors, self−drawings, and motor imagery tests must all be included in assessment proposals. The degree of self−neglect can be evaluated using Bisiach's scale for personal neglect.

Regular assistance from family and friends in the house, planning, and working in a positive relationship will help with long−term, day−to−day care management. Irrigating the contralesional external ear canal with cold water (60 mL, at 20°C) for one minute is known as vestibular caloric stimulation. The patient must wear special lenses that cause the entire visual field to deviate from the lesional side. The impact of indirect visual input on one's body image can be studied using mirrors.

Asymbolia for pain, autopagnosia (inability to localize and name body parts), anosognosia (unawareness or denial of sickness), and anosodiaphoria (obliviousness to illness) are all connected with this disorder, in addition to cases of asomatognosia in which patients reject ownership of a certain component (lack of average responses to pain). Autopagnosia is the only type of asomatognosia in which a person has trouble identifying the right side of the body because of lesions in the left parietal lobe.