As all transactions are time stamped, we need to implement a distributed timestamp server on a peer-to-peer network. This requires some additional implementation and that is the Proof-of-Work that I will describe now. To each block, we now add one more item called Nonce as shown in the figure below − 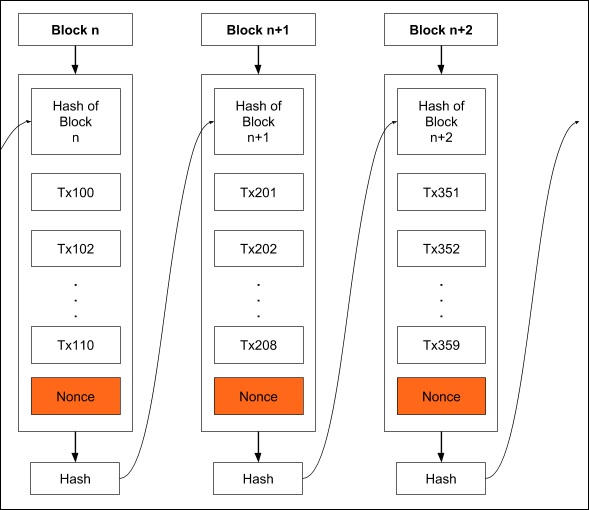 Nonce is a number such that the block’s hash meets a certain criterion. This criterion could be that the generated hash must have its leading four digits to be zero.

Note that the hash generation works at random and is beyond your control - that is you cannot force the hash function to generate a certain hash. Thus, it may take several iterations until the desired hash with four leading zeros is generated. The expected time for generating a block in bitcoin system is 10 minutes. Once the miner successfully mines the block, he releases that in the system making it now the last block in the chain.

Note that there are multiple miners competing to generate the legitimate block. The Bitcoin system awards the first successful miner by giving him certain bitcoins. In general, the miner with more computing power may be an early winner. This can cause attacks on the entire system by those who possess a huge processing power. I will describe the attacks and how these are mitigated towards the end of this tutorial.