What is Wireless Channel Noise?

It is not possible to have any wireless communication system/link with absolutely zero noise level. Noise is additive and hence at the receiver, we have the signal that contains both the transmitted data and noise. The most commonly used noise model is the Additive White Gaussian Noise (AWGN). The noise follows Gaussian distribution with zero mean.

What are the effects of channel noise?

Noise models are characterized by their power spectral densities (PSD). PSD describes the power profile of the various frequency components present in the signal being analyzed. While there are different formulated noise models, the most commonly used noise model for radio wave, microwave and millimeter wave communications is the ‘white noise’ model.

So, some of the well known noise models include

White noise is the commonly used noise model for wireless communications. The response of PSD of white noise is flat which means that the PSD is independent of frequency. 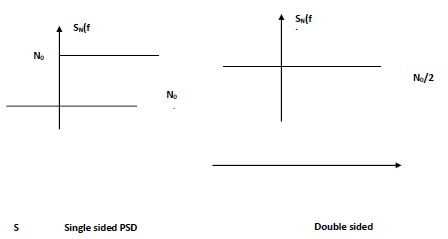 The single sided and double sided PSDs of white noise are shown in the above figure.

The PSD decreases with increasing frequency and the rate of decrease is quick when compared to the Flicker noise model. This noise is also called the ‘1/f2 ’ noise.

‘Noise’ and ‘Interference’ may generally relate to degradation/distortion of the transmitted signal but, in essence, there are some differences between the two. Consider a classroom where a teacher lectures the students. The students may not clearly listen to their teacher when they make noise among themselves. This can be associated with internal noise as present in components of amplifiers and oscillators.

The students may not be able to clearly listen to their teacher when there is an ongoing event outside, such as a parade. This can be associated with interference.