What is the TCP/IP Reference Model?

The TCP/IP reference model has four layers, as display in the figure − 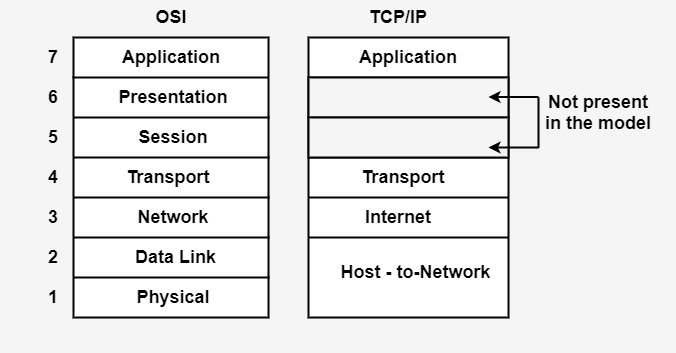 This is the lowest layer in the TCP/IP reference model. The layer functioning is usually different in various relations. The main function of this layer is to instruct the upper layer when the host is linked to the network so that they can establish sending the data packets.

The functioning of the TCP/IP model’s internet layer is similar to the OSI model’s network layer’s functioning. This layer’s function is to enable the host to add packets into any relation and then create them transit separately to the target.

TCP represents Transmission control protocol. It is a dependable connection-oriented protocol. It enables a byte flow broadcasted from one system to be delivered to another system without learning some bug. It can also manage flow control.

An uncertain, connectionless protocol used for applications that do not need the TCPs series or flow control. It can be used in sending speech or video.

This is the highest layer of the TCP/IP layer. The application program’s layer view is a user-oriented layer that helps services provide the network’s end-user precisely. A message or information to be transmitted across the network introduce the TCP/IP model and then carry down into the communication line up to host to the network layer of destination and then upwards up to the receiver end framework application layer.

This layer uses various protocols to transfer the data between applications. Some standard protocols used in this layer are −

It is used for file transmission between internetwork nodes.

It can be used for exchanging email.

TELNET represents Terminal Network. It allows the client to create host-based software by initiating one of the host terminals. It also supports connectivity between the diverse operating framework.

The DNS can change the domain name into IP addresses. The TCP/IP protocol needs the IP address that recognizes linking a host to the computer network.

HTTP is an internet protocol created for a particular software, the World Wide Web (WWW).